I found a place near me called www.ReadyRads.co.uk and they quoted me £200 for a recore.

It might take a couple of weeks to be delivered so I'll let you know how I get on.

Seller gets good reviews, be interesting to see what it's like, it's the kind of problem we may all have to deal with at some stage

Amazingly it came today, definately advantageous to order from Germany instead of China: 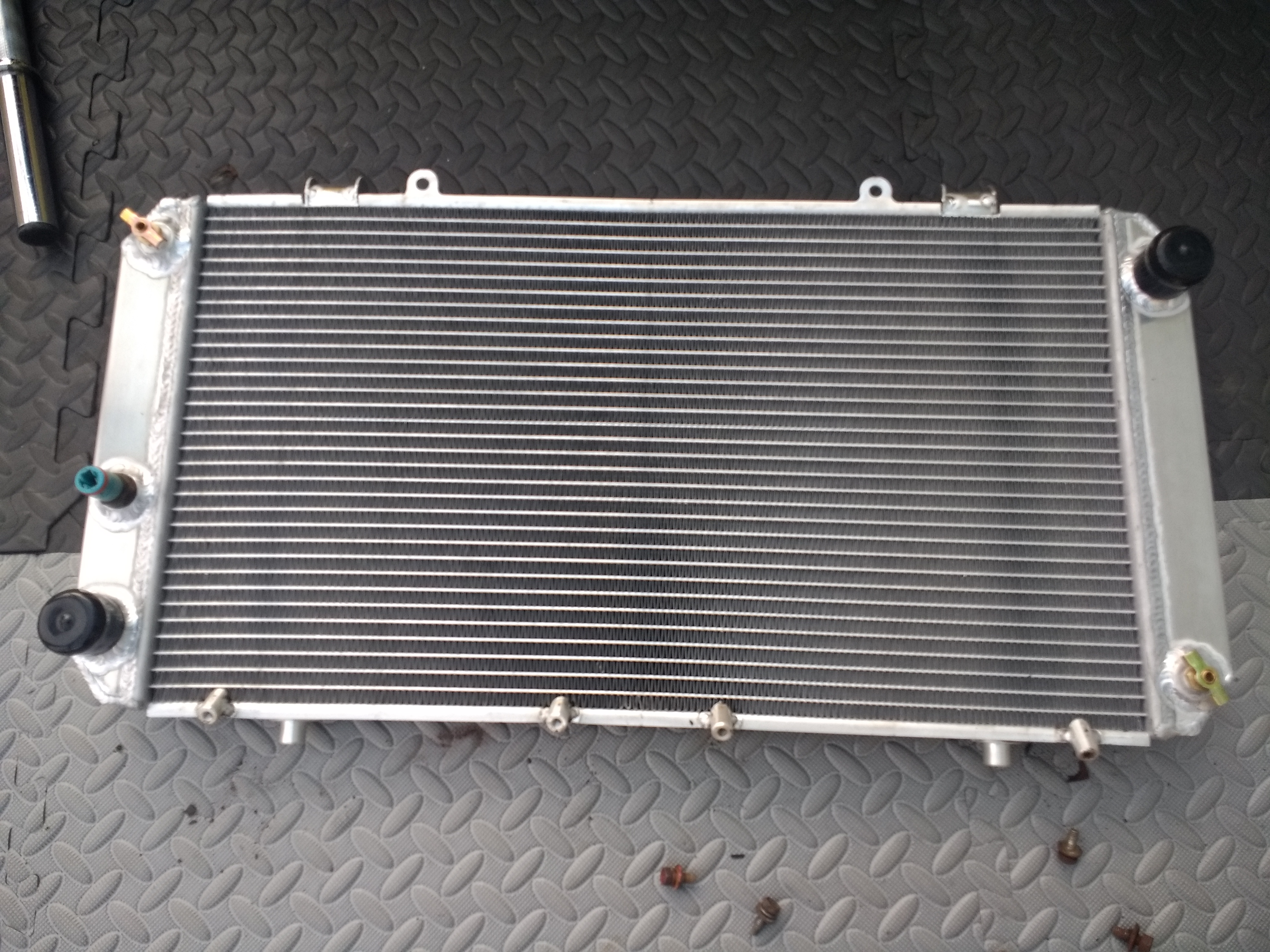 A quick trial fit shows that it fits where it's supposed to despite being 1cm wider, the coolant sensor also fits but the fans don't as the brackets at the bottom just don't line up; not that far off and I might be able to bodge them on somehow but need to think whether to send it back or not.

I've decided to refurb and paint that area so probably won't get to put the rad back on this weekend anyway.
Top

Last time I fitted a new radiator a few years ago, I decided to do away with the two standard fans and fit a single aftermarket fan, been fine since.

This thread has the details CLICKY the first page is relevant, the rest disintegrated into a stupid argument

Good work Jimi, I'm going to refurb my fans a bit so will probably try to bodge them on.

I read some of the arguement that ensued (before giving up on page 2) and I've definately heard my fans going at it when I've parked up plenty of times before now so I'm in the Woods camp on this one, but I have a V6 and it probably runs hotter anyway.
Top

At the end of that thread I posted up my reasons for going to one fan, this what I wrote (save you reading the another page of crap)

jimi wrote:Wow stirred up a hornets nest with this one :lol:

Also, Jimi is a clever guy


:oops: don't know about that !
Just wanted to put my reasons for doing the mod down so peeps can see how I was thinking.
My existing fan shrouds were pretty rusty, it would have cost me a fair bit to replace them with new ones (if they are still available)
With the fans fitted you either have to remove the radiator from below or struggle to remove the fans in situ and pull the rad up. I reckoned it would be easier to replace the twin fans with a single slimline lightweight one, and make future radiator replacement easier.
Adding my previous experience with a Fiat X1-9 to my MK1 experience I reckoned that a single fan would be good enough in the UK.
I had read of people running with no fans, but didn't see that as a sensible option for a couple of reasons, one of which has already been mentioned. Long periods of idling or stop/start (traffic jam scenario) movement.
The other reason hasn't been mentioned but I think is probably more important.
All the scenario's quoted make a point of saying that the system will run cool in normal conditions, true but what about when something goes wrong ? eg a small leak causing some coolant loss, or an airlock, faulty thermostat, something your not aware of, you get the idea.
With 1 or 2 fans at least you have chance of the system maintaining normal temps, with out fans .......... little chance IMHO.
So I went with 1 fan and would recommend anyone thinking of removing both fans to think again, as already pointed out the modern slimline fans weigh next to nothing

exactly what I thought

Well this is fast becoming a disaster. Faults found so far:-

1) Radiator fans do not fit as the brackets don't match up properly. Not too far away so I was able cut a small section of the fans out to get them on.

2) The two brackets that fit over the top do not secure the radiator properly as it is slightly shorter than OEM but I was able to use some cardboard to pack it out a bit.

3) The drain plug leaks and there is steam coming from it. I tried refitting it with more PTFE tape than it came with but no difference. The plugs on this have a useful screw out section for bleeding/draining but this causes the leak I think meaning I can't really use anything to seal it because it's in the centre of the plug.

4) The coolant sensor leaks which I don't think it did before (certainly never noticed and I had a good look beforehand).

Can't say I've got much confidence in this now and the next thing I type will be to the supplier to see what they will do about it.
Top

Doesn't sound encouraging at all, a recore is begining to look like a much better option.

I still have the last radiator I changed (which has one leaking tube) I may well get that recored and keep it as a spare, at least I know it fits.
Black is not a colour ! .... Its the absence of colour

I sent the Chinese rad back and got my refund no problem so nothing lost apart from time there. I went to ReadyRads but the guy was about to go home to Brazil for a month so couldn't do it until mid January.

I found another place though - https://www.city-radiators.co.uk/ - so I tried them out and got it back today. For £175 they've recored it and even de-rusted and painted it up so I'm well pleased. 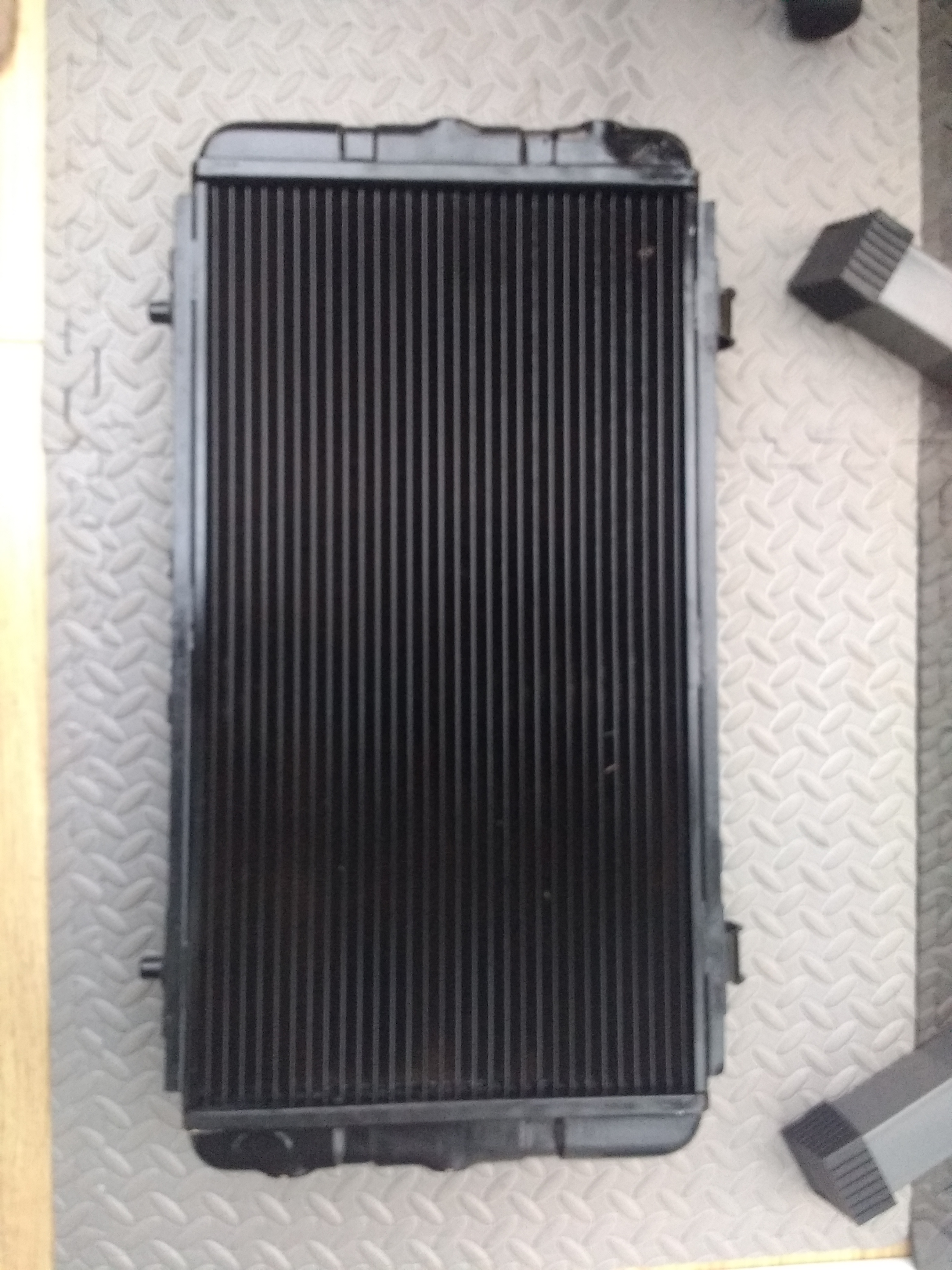 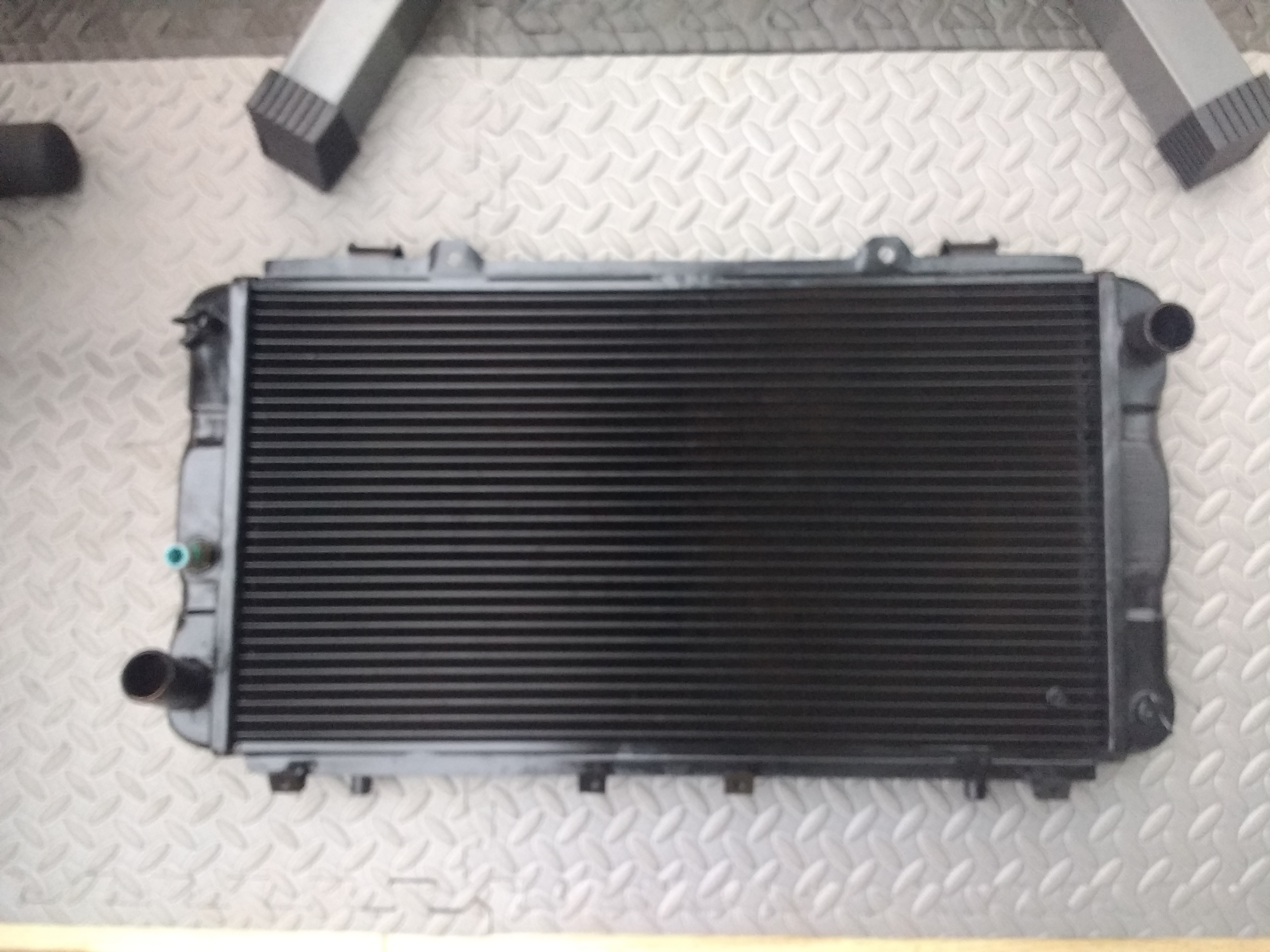 Hopefully I can get it fitted over the weekend so we'll see it it's worked.
Top

Looks great, hope it performs the way it looks

OK, have just had a "censored" of a time refitting this radiator, it seems to have grown by about a cm in height so the brackets don't fit on and I had to remove the rubber and bend all the fan brackets up a bit as they were fouling support bar underneath. No idea how this could happen, I guess the whole thing must have been apart at some stage and welded back together or something.

Anyway, I finally got it on after much bodging, refilled with coolant and then the car won't start coz the battery's flat so I'm done until tomorrow now.

On a seperate note, does anyone know what the hell this is:- 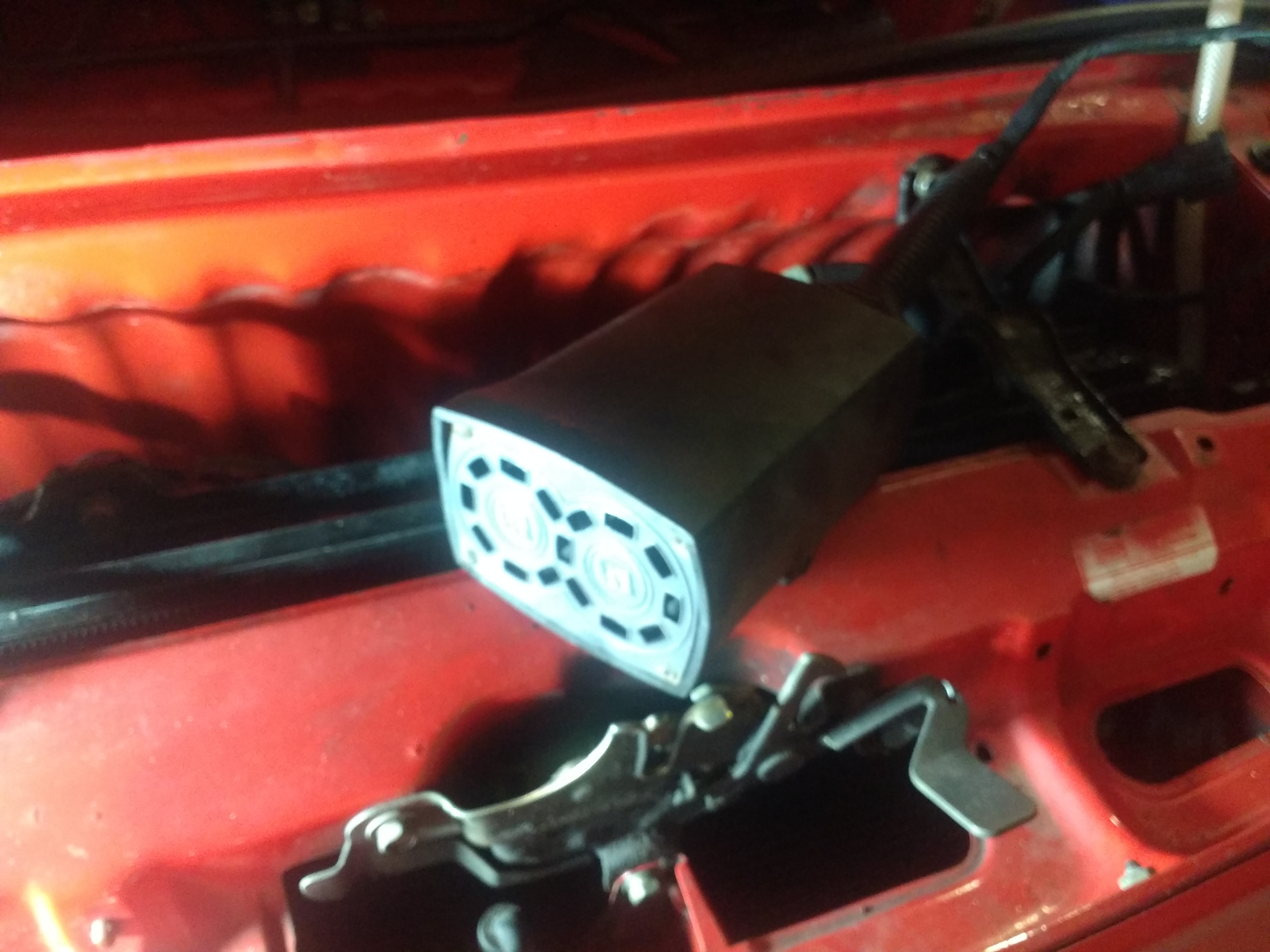 It fits to the chassis on a bracket behind the fans and I've gone and lost the bracket. It looks like a factory fit alarm siren but the alarm is long gone and I have something else now. Do all cars have this?
Top

Don't recognise that, doesn't ring any bells, as you say possibly for an alarm? The only thing I remember from behind the radiator is one of the horns.
Normally on a recore they take the top and bottom tanks off and fit them to a new core, looks like they measured it wrongly and the new core is one row too high