How To:- Activate the A/C and Econ Buttons

After much investigation I have worked out how to utilise the 2 switches for Aircon and Econ that are normally blanked off on cars with no A/C ( most UK cars )
These switch have a blanking plate fitted on UK cars but the switch mechanisms are there, all that is needed are a couple of buttons fitted ( A spare heater control would be the best source all the buttons are interchangeable and the legend plate can be changed, but I'll deal with that later )
The switches are normally interlocked and can't be used independently i.e. push one and the other pops out. This interlock can however be removed, to give 2 independent switches.
While investigating this I have worked out the pin out for the heater control socket and how to change the indication LED's, I have also managed to find a source for the correct LED's in Green, Red, Yellow and Blue It's proved extremely hard to find the correct size of rectangular LED's especially Blue.
LED's of the correct dimensions ( 5mm x 2mm ) are available form here Futulec
Unless you are reasonably competent at soldering /desoldering I don't recommend trying this mod.

First step is to remove the 2 slider knobs and the 6 buttons ( the blank can be removed now or later ) Removing the knobs is made easier by pushing on the side of the shaft they are on with a small screwdriver while pulling the knob.
If you turn the control upside down you will see a small rectangular recess on the buttons, lever gently here with a small screwdriver to remove each button. 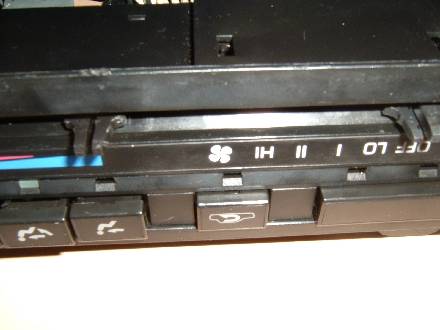 On the back of the unit, first remove the wiring socket from the mounting by pulling it backwards ( away from the front ) it's slotted into a clip, now remove the 4 Philips screws and pull the rear part away from the front ( its also held in by small tabs so pull the sides of the front apart to help release it...........Its worth noting that all dismantling on this unit needs to be done GENTLY or you WILL break something, no great force is needed to remove anything on this !! 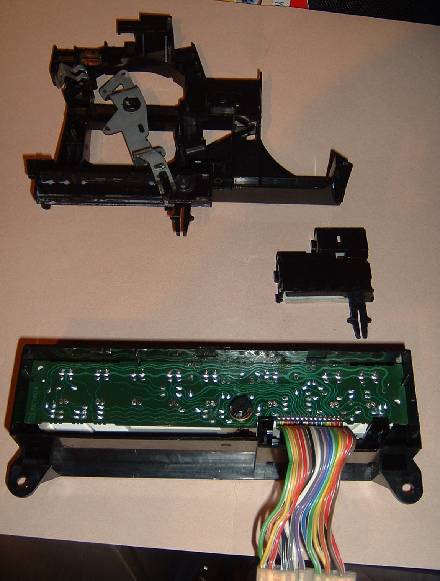 Then pull out the fan speed control section ( might need a little wiggle ) This will leave the PCB ( Printed Circuit Board ) sitting in the housing, remove this by gently pulling the ribbon cable and wiggling ( again GENTLY does it ) 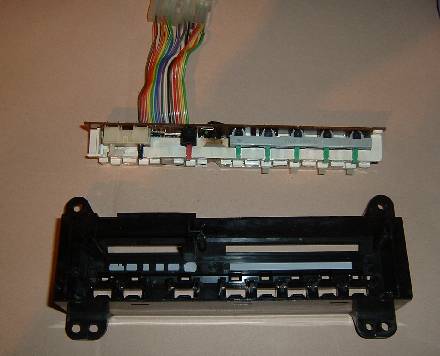 Now for the interesting and delicate bit, desolder all 8 LED's ( note the orientation as they must be refitted with the correct polarity or they will not work ) this pic shows where to desolder.

If you just want to change the LED's then just remove and replace 1 at a time and rebuild the unit in the reverse order of dismantling.
If you want to utilise the spare switches then continue...
With the LED's removed, the white cover ( including the clear lenses ) can be removed, this will give you access to the A/C ECON switch

Remove the cover from the switch by gently prising up the 4 clips that hold it in place.
NOTE ONCE THIS COVER IS REMOVED DO NOT OPERATE EITHER SWITCH, much wailing and gnashing of teeth will result if you do......you have been warned !!
Once the cover is off you need to remove the 2 small plastic interlocks pictured ( small pair of tweezers is just the job ) 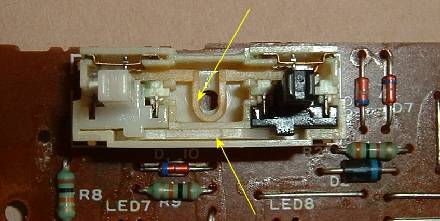 Do not disturb the switches while doing this, once removed refit the cover ( make sure it the correct way round )
Now you can refit the white cover and replace and re solder the LED's. All that remains now is to rebuild the unit in the reverse order of dismantling.

Select the spare buttons you wish to use, the legend part can be remove by gently pushing from the back with a screwdriver once removed you can use it as a template to make a replacement with a legend to suit your application they are only very thin perspex and how you alter / replace them is up to you ( I'm not telling you that part )
The PCB and the switches are not designed to carry any substantial current ie if you use them to directly switch anything with a heavy current they will fail quickly, use them to switch a relay ( that's what Mr T intended them to do )

These are the pins on the plug that you need for these switches
PIN 2 ( Brown) Connect to ground ( earth, bodywork )
PIN4 (Green ) Positive output switched by the A/C switch (1st switch from the left)
PIN10 (Red ) Positive output switched by the ECON switch (2nd switch from the left)
PIN15 (White ) Common positive supply to both switches ( you will need to connect a supply to here ) 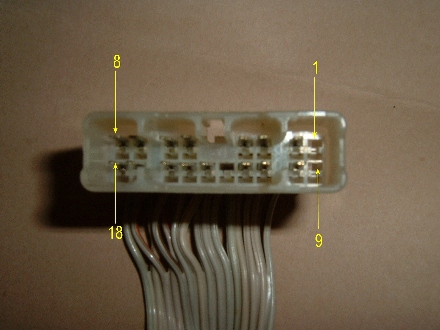 This is the complete pin out for the heater control socket
Looking at the coloured side of the ribbon cable, the green on the left corresponds to pin 18 and Brown on the right corresponds to pin 2
1 No pin
2 Brown - negative ground
3 Orange - negative ground
4 Green - positive output from A/C switch
5 Gray - F/D
6 Black - Face
7 Red - Foot
8 Yellow - Recirc (with button in out position )
9 No pin
10 Red - positive output from ECON switch
11 Yellow - Positive in for ventilation switches
12 Blue - Backlight
13 No pin
14 Purple - Backlight
15 White - Positive common supply to A/C & ECON switches
16 Brown - B/L
17 Orange - Defrost
18 Green - Recirc ( with button in the in position