How To:- Replace the Sills

The car is a 1989 Mk1b, 116k, with the original sills. Having looked over the car I decided to renew the sills before putting it in for it's MOT and I hope these notes will give you some idea about the job. One thing that did amaze me was how solid the car looked until you started prodding about - the side skirts really do cover up all sorts of mess.

Mig welder, I used 0.8mm flux cored wire rather than bare wire and CO2.
Angle grinder, cutting and grinding discs
Good quality tin snips
Clamps, the more the better. I used a mixture of mole grips and G-clamps.
A joddler - a pliers type tool for making step flanges. This is optional in this method because the weld line is hidden, but I used one.
Drill, 6 or 8mm
Safety gear, gloves, goggles, etc. You're making a lot of flying metal and there's not a lot of room to dodge it.

I used Ford Escort Mk3/4 FULL sills.
They are made by Hadrian Panels and so most motor factors can get them, mine were £9.70+vat each from Beevers in Barnsley, mail order. By careful cutting there's enough metal to replace the sill from the A post to the rear arch, including the triangular section hidden by the rear of the side skirts. 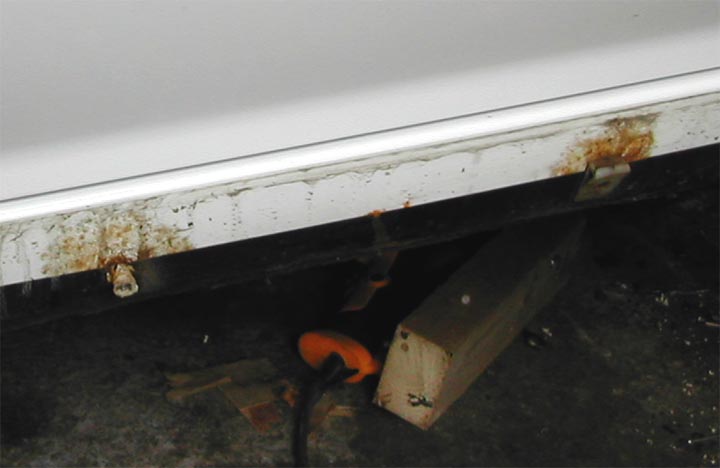 The outer skirts came off easily and there was some rusting around the plastic mounts. There were no obvious holes anywhere on the sills but if you pressed hard underneath you got the usual creaking of rusty metal. 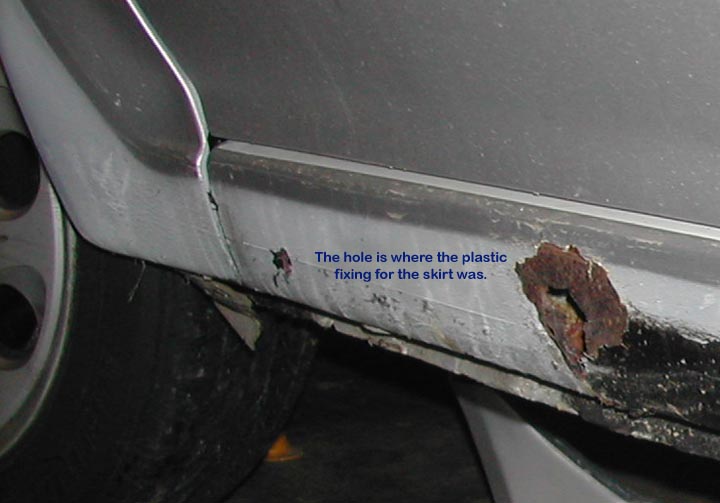 Ignore the plastic rawlplug that had been used as a mount (and gives you some idea of at least one previous careful owner), prod around with a screwdriver and you get the crusty hole shown above. So it's a right mess and patching isn't an option. 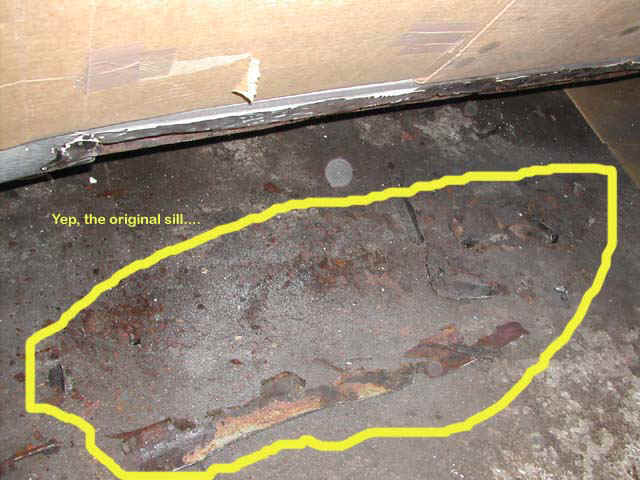 I wanted to keep the door closed during the work so used cardboard trapped in the door shut to protect the paint from grinding and weld spatter. In Fig 3 you can see the cardboard, and just how much "metal" was left after I removed the offside sill. Impressive, eh ? 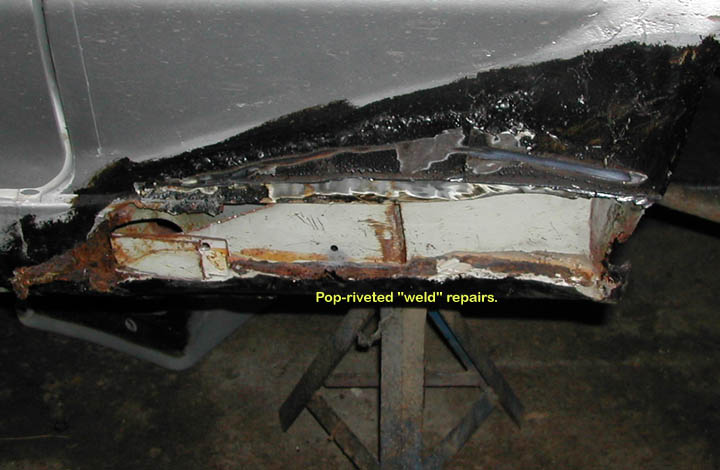 FIG 4 shows the n/s rear wing at sill level. There was a bill in the file for "weld repairs" and these were the only repairs I could find on either side. Inventive use of an old washing machine case and held in with pop rivets and filler. But I missed it when I bought the car, and had been driving round all year with it......

The good point was that the outer sill seems far more susceptible to rust than the inner sill and floor. This seems to be much thicker metal and although rusty it's sound. The cut lines were only on the outer sill, I kept the door-shut section as this was hardly touched by rust.
The cut line was 25mm below the door line, marked off and cut using tin snips/angle grinder. All the corrosion was on the bottom and lower third of the sill. It was bad around the skirt mounting points, but pretty sound above them.

Fig 5 shows the o/s sill with all the rust cut away and ground up ready for trimming properly to accept the new sill.
It's all bright metal, it's just the flash reflection which gives the darker areas which look like rust. There are reinforcing sections at the A & B pillars (the A pillar shown here)and these were ok, just minor patches on the B pillar. 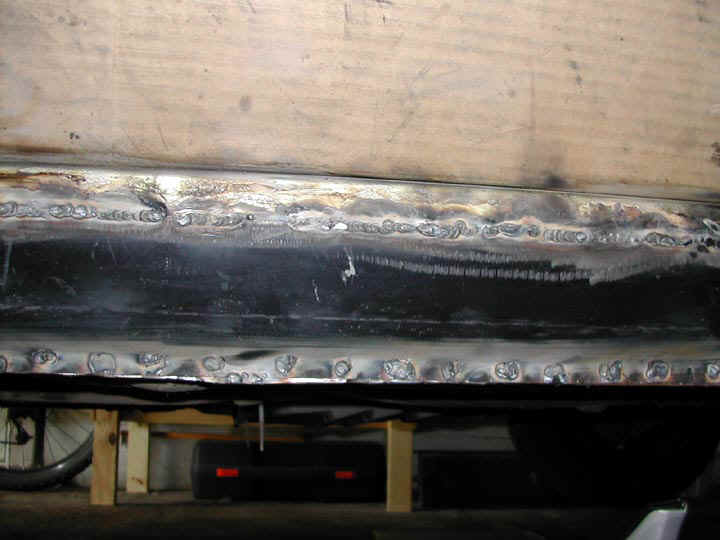 The new sills were cut horizontally just below the door shut, and then into a length which repaired from the A to B posts on the car. The profile is slightly out and needs gentle adjustment with a hammer to match the car. Getting the same profile makes it easier for later when need to attach the outer skirts. Keep all the metal you cut away, you'll need it for the rear wing triangle section.
On the upper sill weld I used the joddler to put a stepped flange on the new section. It's not essential as the skirt will hide the final weld anyway, but I find it easier to ensure good weld penetration. And if there were no skirt or the weld had to be done higher, then you could grind it flush without losing strength.
FIG 6 shows the sill as it's being welded in position. I used stitch welding for the upper welds, doing only 8-10mm at a time to minimise distortion. For the lower flange I used plug welding, the number of plugs based on the original spot welds. 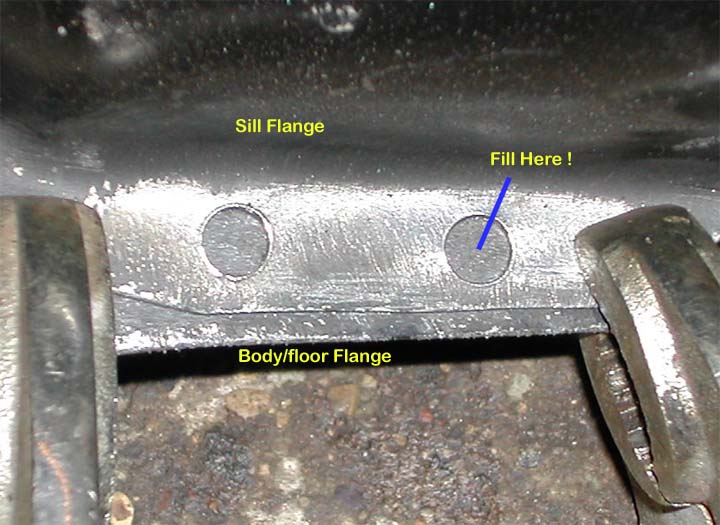 If you've not used plug welds before, they are quite simple, FIG 7 shows a made-up sample ready for welding.
Drill a 6mm (or bigger) hole in the new sill flange and clamp it in place with the flange on the car. Fill the hole with weld, easy !
Actually it does take practise and the steel must be bright metal because it's easy to make a good blob that has lousy penetration. There's nothing magic about a 6mm hole, you could make them smaller but it's more difficult to get good weld penetration on the lower sheet.
After you've done a couple of plugs, take a screwdriver and try to prise the new metal off. If it bends then you have a good weld, if you get a snap then it's back to the grinder. 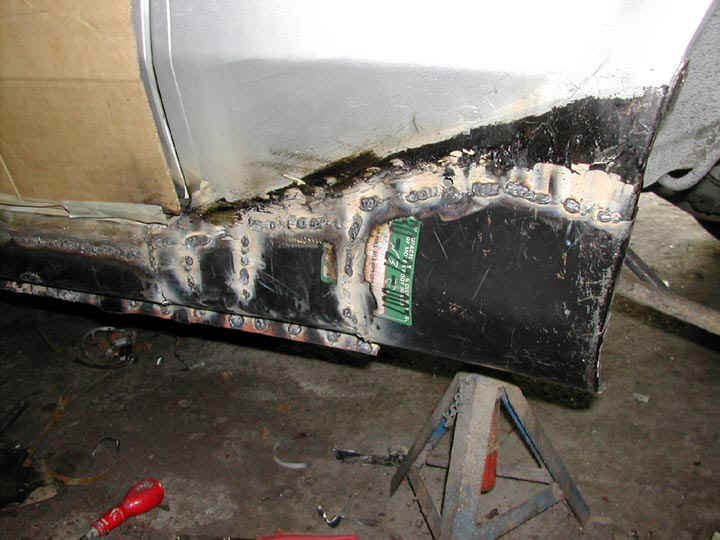 FIG 8 shows the rear wing triangular section being patched into place. I had to do both sides in several pieces because I couldn't form the multiple curvature over the complete section and get it looking right..... Obviously not a big enough hammer ! 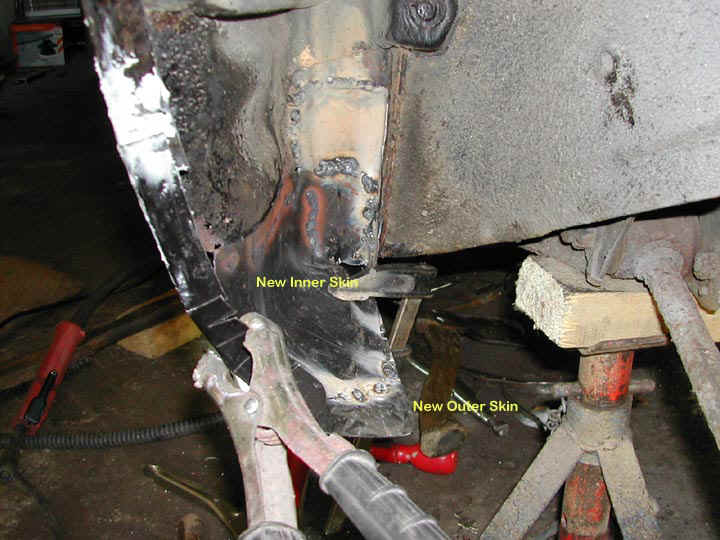 On my car this was the worst part because by the time the previous bodges were out I had to repair the inner wheel arch as well because it's a double skin section. You can get some idea from FIG 9, which shows the patches being tacked in place. It's a multi-curvature profile which is why there's 3 separate patches although if you're handy I guess you could do it in one or two.
I would honestly have preferred to use but unfortunately it's near the seat belt and rear suspension mounts so it's got to be solid. I don't think you'd get an MoT fail although technically it's within the 30cm rule, but a poor job will allow water in to rust away the inner sill and seatbelt mount. 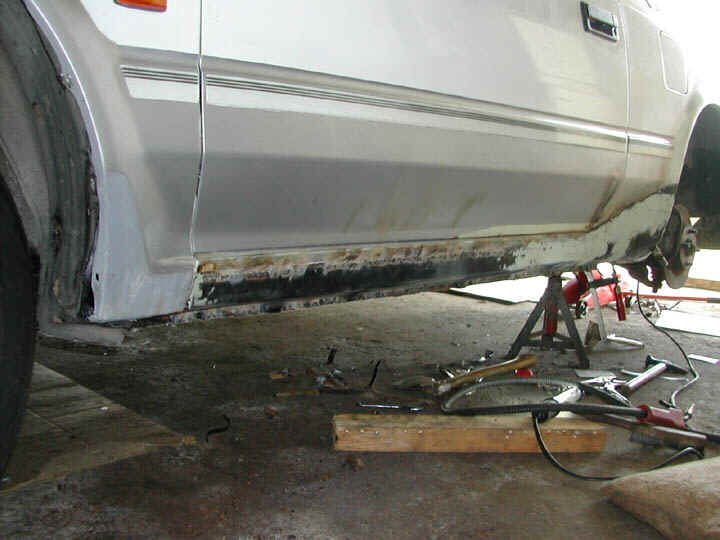 I used a skim of filler on the rear triangle simply because there was so much stitch welding that I was bound to have left the odd gap and I wanted it to be as watertight as possible. It's not pretty and hidden by the side skirt so it's just there for waterproofing - you could do the same with seam sealer.
Water getting into this section will either hold up and rot out the rear triangle or work it's way into the sill and rot it from inside. 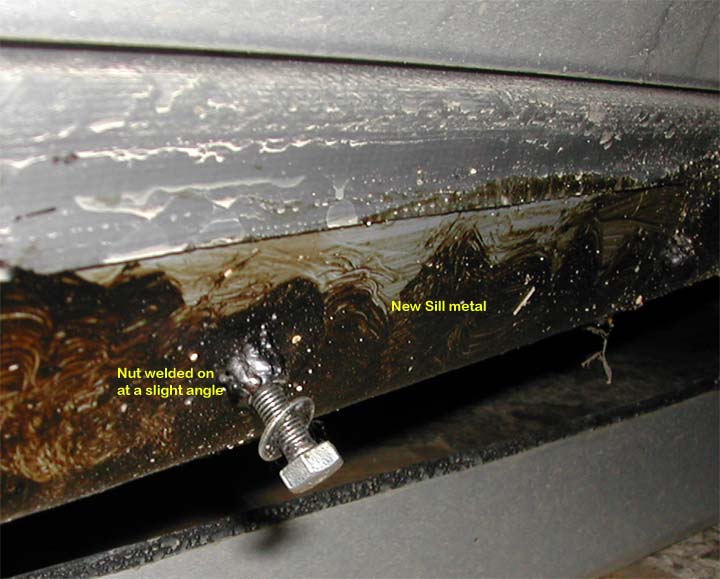 At this point you've got a driveable car although it looks a mess, but by now your confidence will be high. To attach the side skirts you can offer up the skirt, mark up, drill and file to make square holes so that you can re-use the original Toyota plastic mounts. However, because I had B&Q rawlplug sill mounts (FIG 1) I decided to bolt the skirts into place using captive nuts.
First I sprayed the sill in grey primer, offered up the skirt and marked the mounting positions. Drill and file to make a tight fitting hole and then tack the nut into place. Leave the bolt in while you're welding because firstly it keeps the weld spatter away and also lets you see that you're mounting the nut square with the sill profile. I found I only needed a couple of these fixtures at the side and bottom to mount it really securely. Use stainless bolts in mild steel nuts if possible, if not then plenty of Waxoyl !!
The nuts can be welded on at a slight angle on the side mounts, get the profile from the old Toyota plastic wedges. The ones underneath the sill need to be mounted flush with most of the nut inside the sill. Drill a few extra holes in the side which you can use for waxoyl injection when all the welding is over. 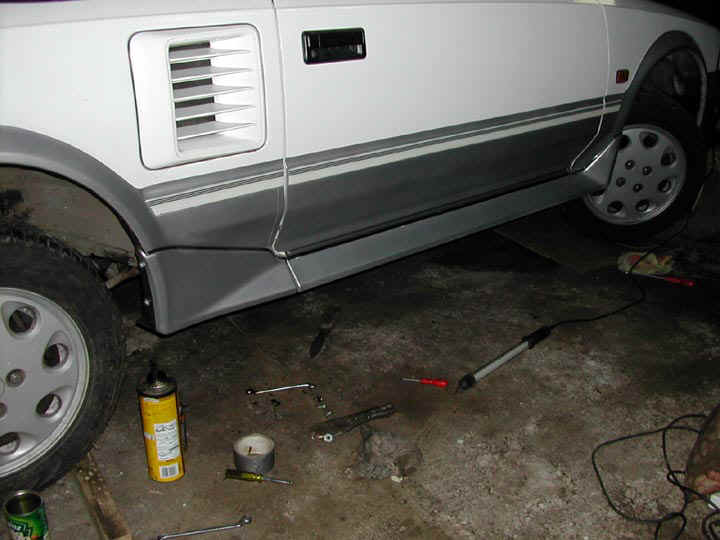 FIG 12 shows the car with the outer skirts in place, a brilliant idea, hiding all that lousy welding.....

Paul Woods & TwoBrutal for the info on panels,etc.
Mk1 Tech section here & all who have posted pics of their repairs in the past.