How To:- Install HID headlights

Well here is how I managed to fit my HID kit so hopefully this prove useful to others.

I don't go into detail on removing the headlamp units as there is already an excellent article on how to do that in the Know Your 2 section. It should also be pointed out that I am doing the swap with Raybrig Lenses and my car's JDM so no cutting involved - UK cars need some dremmel action.

You will also need 4 self-tappers (4mm x 12mm) for these guidelines to mount the ballasts.

First, I started off by mounting the ballast mounts to the front wall of the frunk. I found it best to mount them at an angle to
a) get the wires as close to the grommets for the headlamps
b) the kit instructions said to mount them vertically so at least I was half way there.
I used a small metal cutting bit in a drill to make the initial hole and then used the self tappers to finish off the job. Take care when drilling as you don't want to go too far through the other side into the rad but you'll be fine as the small bits aren't that long usually anyway.
Make sure you have enough length on the leads coming from the ballasts to poke through the headlamp grommet. Keep the bolts that were meant for the mounting kits in a safe place for later... 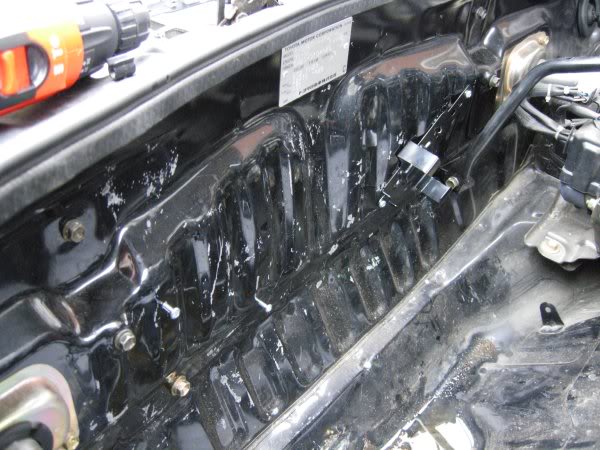 And with both in: 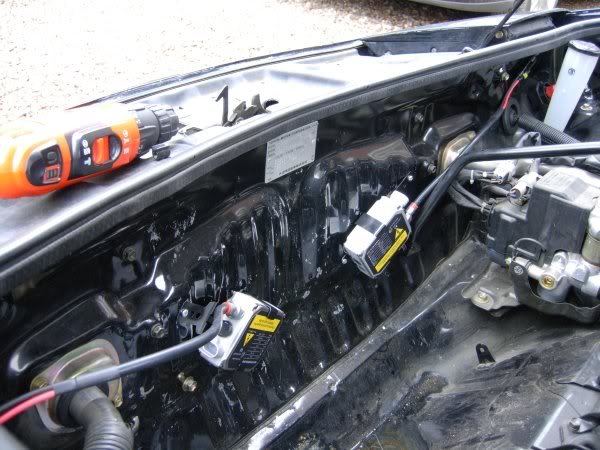 Now you need to mount the relay. I did this with a small bolt that was already there on the right hand side of the frunk next to the fuse box. Conveniently, a bolt intended for mounting the ballasts was the perfect fit! I ended up mounting it vertically as at an angle the live feed to the battery wouldn't reach. 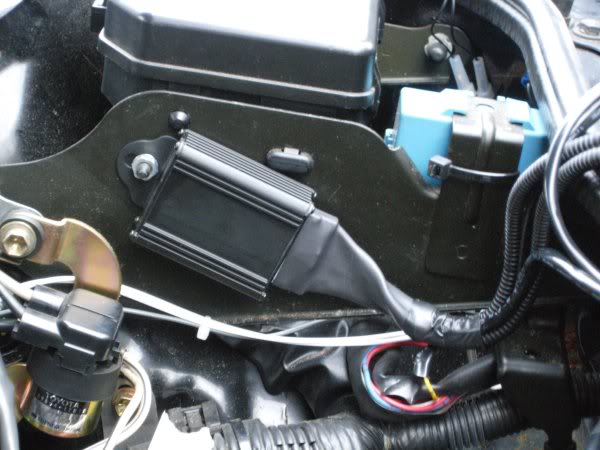 Next I removed the headlamps. One of the existing headlamp connectors needs to be connected to a small adaptor coming from the relay so I chose the right hand lamp being closest - duh!
The tricky bit is getting the existing adaptor through the grommet into the frunk. I found the best thing to do was make a cut in the top of the grommet. Tried a stanley knife but was getting nowhere, so in the end used some wire cutters (bit like pliers but with pincers on the end). I used my finger to poke a bulge in the grommet and carefully snipped it until i had cut through.

The adpater and grommet of pain from the 'light side': 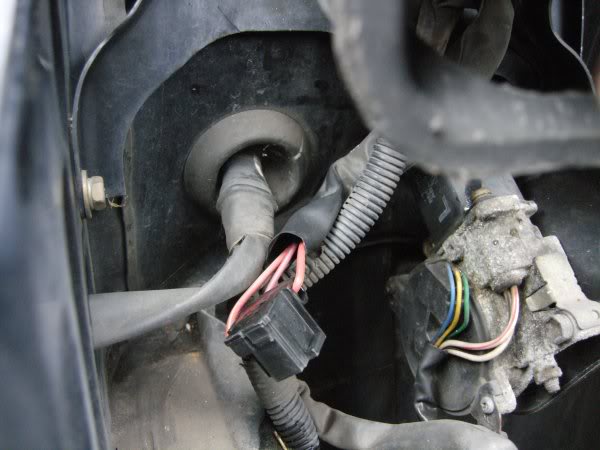 Forcing the adapter through the grommet can be a little frustrating but I found it easiest to do it from the frunk side with a flat blade screwdriver and ease the grommet around the adapter. Success!!!! 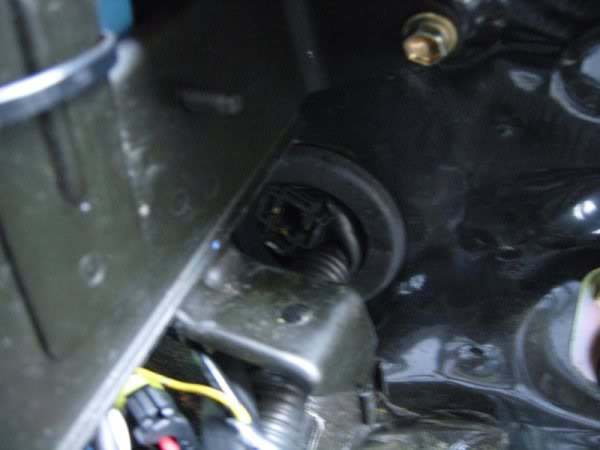 Connect it up and then refit the headlights with the HID bulbs in.
Tip - to unscrew the HID bulbs, place them in the headlamp unit before doing!
Now for each lamp you need to feed 2 of the cables from the ballast with the waterproof connectors on through the grommet and connect up with the bulbs in the headlamp well.
The 3rd smaller connector from the ballast was left in the frunk and the other bit of it from the bulbs was pushed through the grommet as it didn't look very watertight. Zip tie the original adapter in the left hand unit to a safe place out of harms way.

You'll need small hands to do the connectors up in the headlamp well though!!! 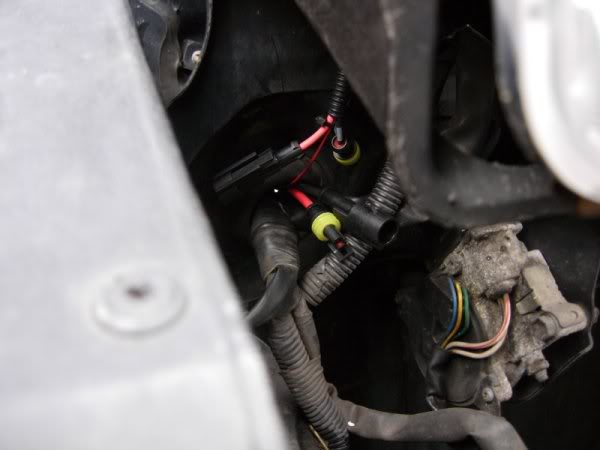 3rd small connector from the frunk side and the adapter from the original light. 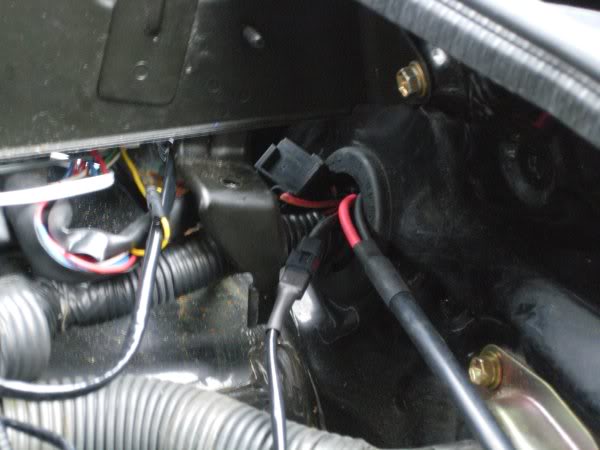 The 2 earthing leads from the ballasts are meant to be connected to the negative terminal of the battery but they are far too short. I used two existing bolts on the front wall of the frunk for this. Take out the bolts and use a sharp flat bladed screwdriver to scratch away the paint around the bolt until you are down to bare metal. This will ensure a good connection. 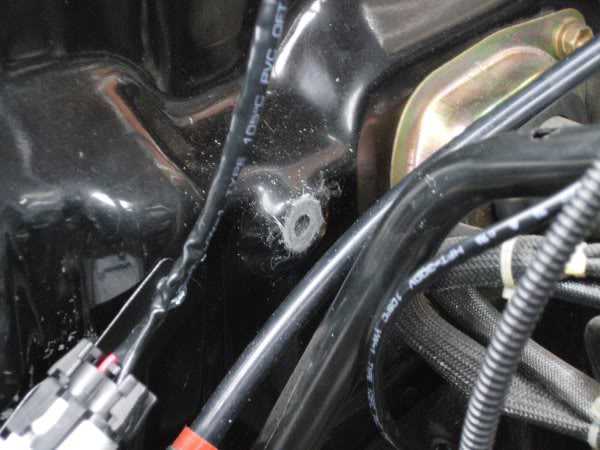 I used the 2 washers that came with the bolts for the mounting brackets on each side to ensure a good tight hold. Blob of vaseline on top for precaution never hurt too.

Then its a case or routing the joining cable around the small struts with zip ties and attaching the live feed to the battery by routing it under the battery mounts. 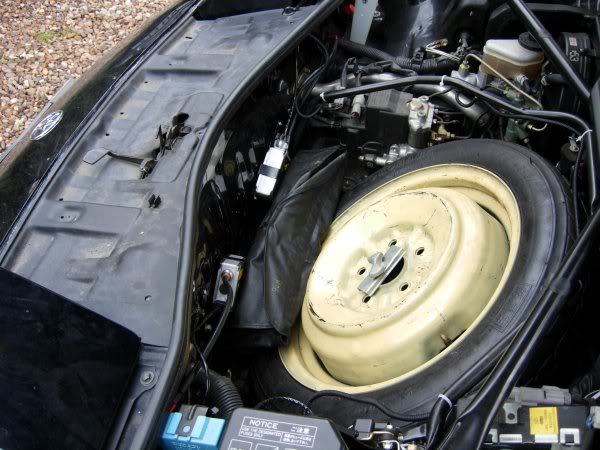 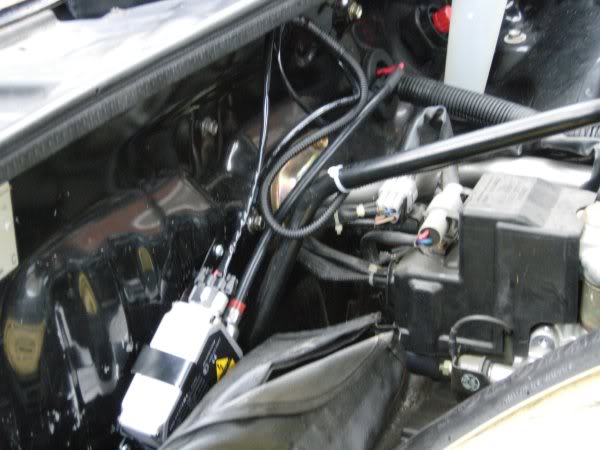