How To:- Repair the Electric Aerial

This document aims to provide as much information as you are likely to need for the MKII MR2 electric aerial.

It has been compiled based on personal experience gained from installing my own Stereo/Head Unit and repairing several aerials.

If you have any further information then email me at This email address is being protected from spambots. You need JavaScript enabled to view it..

What’s All The Fuss?
There are literally hundreds of posts on various web sites and discussion groups about MR2 electric aerials. This is mainly due to the fact that it connects up with twice as many wires as you would expect. If the aerial breaks then the owners will discover that the unit replacement cost from Toyota is extortionate and third-party electric aerials just don’t look right as they don’t come to rest at the top of the spoiler.

Electrical Description
The aerial is controlled by an ‘Aerial Control Relay’. This is actually a circuit board consisting of some electronics and two electro-mechanical relays which switch the supply to the motor in order to raise or lower the aerial mast.

There are SIX wires in the loom to the aerial control relay, which consist of:

The 0V wire is straightforward. It provides the return current path.

The control signal wires are also straightforward, though are the source of much confusion to owners. I shall explain.

With some equipment once ‘ANT’ has gone High it may remain so until the unit is switched off. This is so the aerial does not keep going up and down if you keep switching between CD and Radio.

The MR2 aerial operates in this way. Once it has gone up, it stays up until you turn the Stereo/Head Unit off. It does this using TWO control signal wires. One is an ‘Enable’ signal and the other is the ‘ANT’ signal. To go up the aerial needs a High on BOTH ‘Enable’ and ‘Ant’. Once the aerial is up switching ‘Ant’ to High or Low has no effect. The aerial will stay up until ‘Enable’ goes low.

This is illustrated in the following truth table.

The three 12V supply wires are in my opinion a bit over the top. One is a constant supply (fed by the ‘Dome’ fuse) which is sensible enough as you do want your aerial to have power to go down when you turn off the ignition and jump out of the car.

The other two are switched supplies (one fed by ‘Rad & Cig’ fuse the other by ‘ECU-IG’ fuse) which both come on when the ignition is switched to the ACC position. The reasoning for having two is a mystery to me. 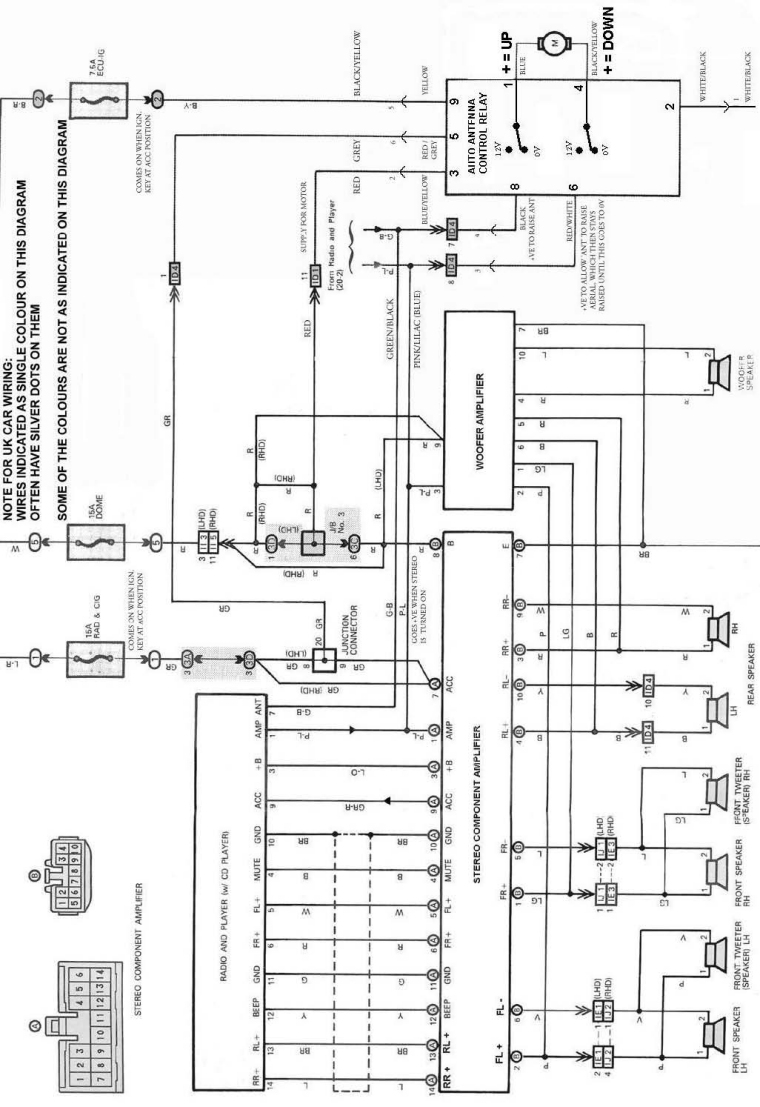 Mechanical Description
The aerial shaft has a plastic square sectioned toothed insert within it. The teeth on the insert mesh with a toothed wheel which is turned via a clutch arrangement by a gear wheel which is driven by an electric motor in order to raise and lower the aerial mast. The electric motor has a worm gear as an integral part of the shaft; thus the aerial mast can not be raised or lowered manually.

The aerial mast can be replaced and are available from Toyota for about £25.

Removing The Side Spoiler
Pull back the boot lining on the aerial side of the boot. With a 10mm socket or spanner undo the two nuts on the underside of the rear wing that hold on the side spoiler. Access to the rear nut can be improved by unclipping the wiring harness from the clip next to the rear nut.

Lift off the spoiler. You may have to prise out the clip at the front. 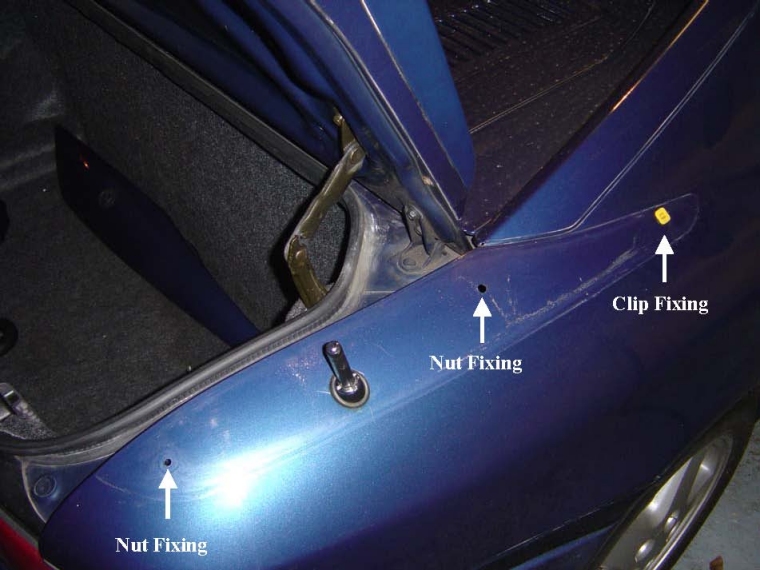 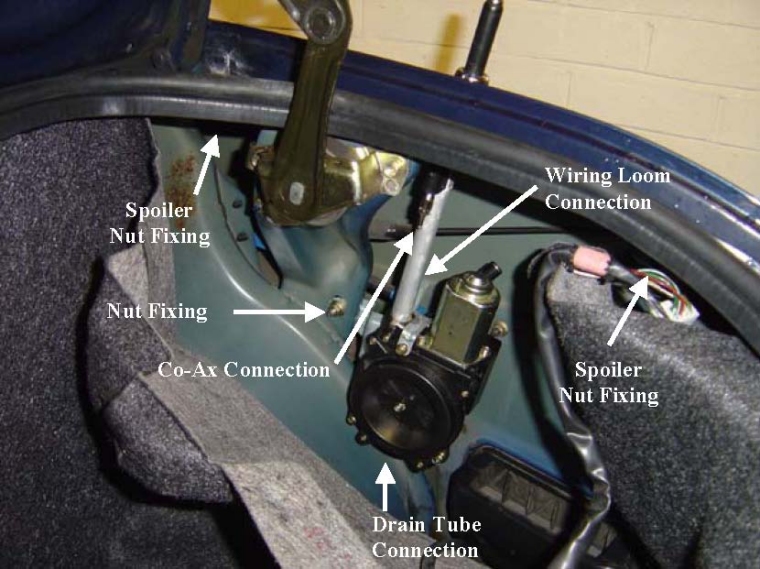 Unplug the Co-Ax connection, the wiring loom connection (feel for the bit you have the press in on the plug) and disconnect the drain tube from the bottom of the aerial or leave it connected and pull it out of the hole in the boot floor.

The aerial has to be retracted in order to remove it. If yours is stuck up then you will have to remove the motor (See ‘Dismantling The Aerial Section’) with the aerial still mounted before you can manually lower the aerial mast.

Unscrew the chrome nut on the top of the aerial. A flat bladed chubby screwdriver in the slots is good for this. Remove the rubber grommets.

With a 10mm socket or spanner undo the single nut that holds the aerial in place and withdraw the aerial.

Dismantling The Aerial
Unplug the wiring from the motor and control relay. To remove the control relay carefully push it upwards. This may take a bit of effort as there are one or two small protrusions underneath that mate with holes in the bracket. 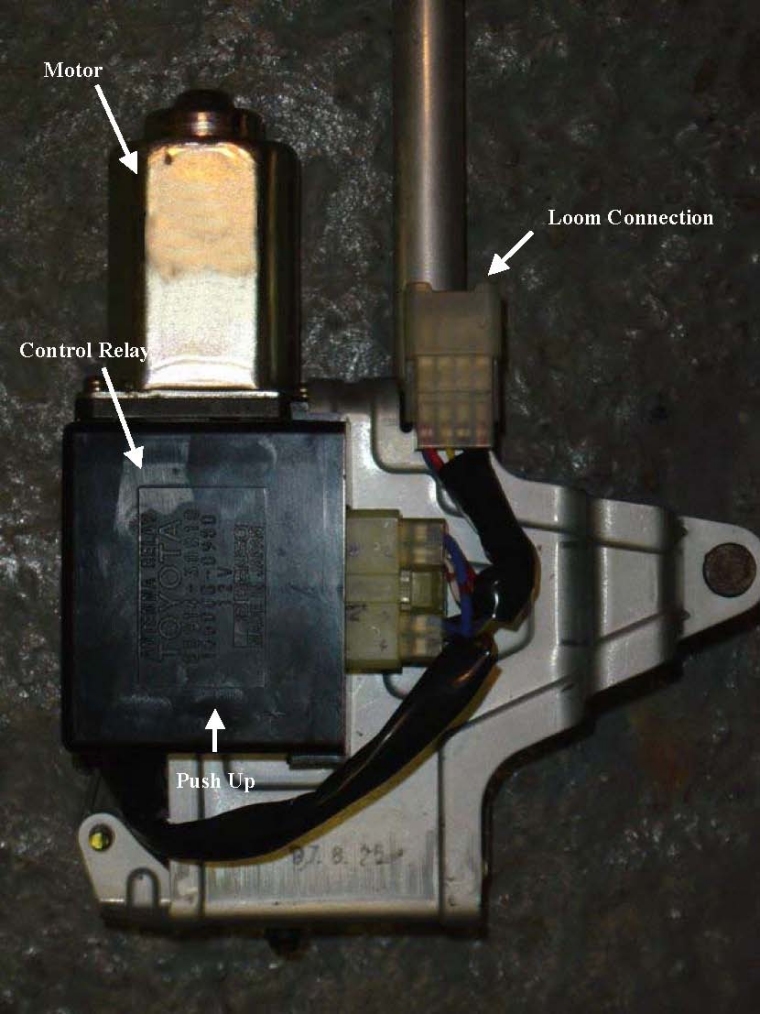 Note: Some screws have retaining nuts so watch out for these, as you don’t want them to fall on the floor and disappear. 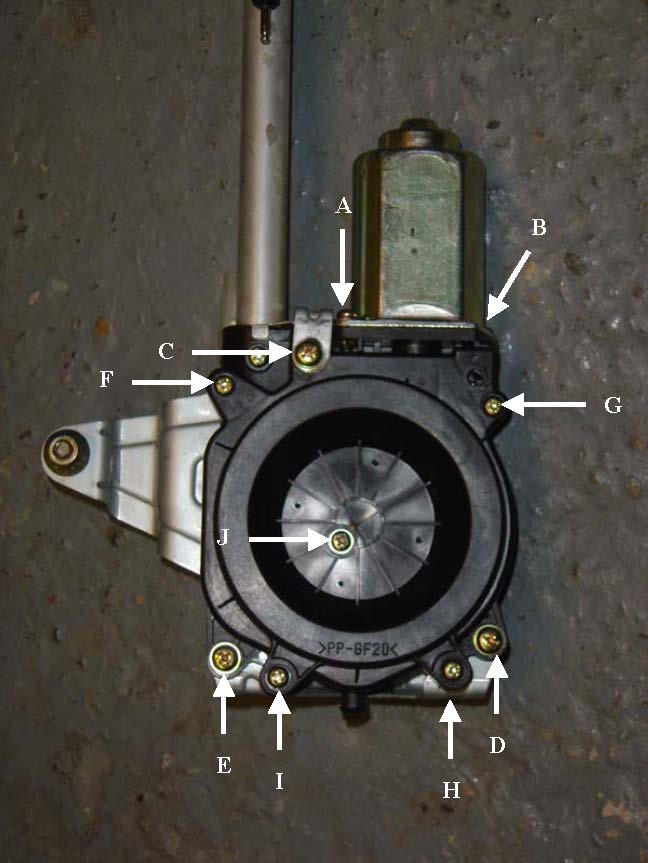 To remove the motor cover remove screws A and B. Make sure you make a note of which way round the cover is as if you replace it the wrong way round the motor operation will be reversed. Watch out also for the end bearing which may come out on the end of the shaft or remain in the motor body.

The motor armature may be removed by turning it to unwind the worm gear off the bevel gear. 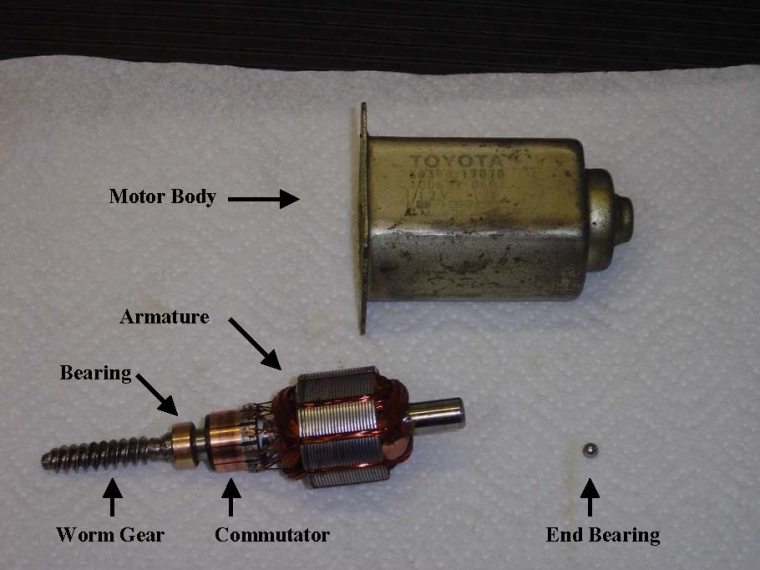 Some versions of the motor have loose springs and some have retained springs so take care that loose bush springs do not fall out and disappear. 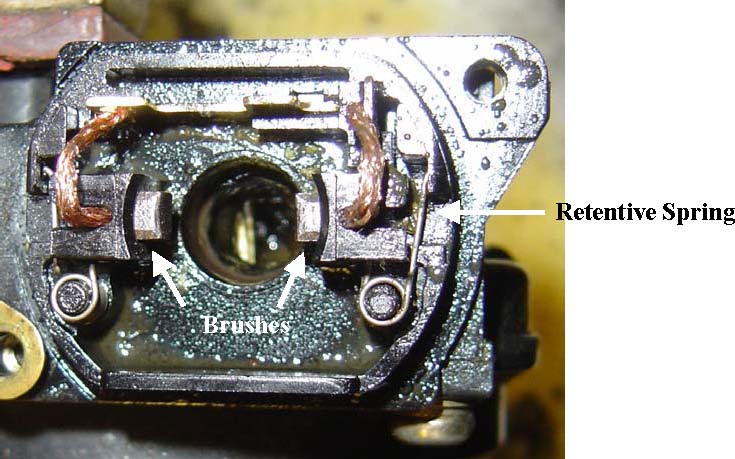 Once the armature has been removed the aerial mast may be pulled up to uncoil the toothed mast insert so it does not spring out when you remove the cover. Don’t worry it wont cause a problem if it does.

To remove the bracket remove screws C, D and E

To remove the cover to access the internals remove screws F, G, H, I and J The cover may need prising apart due to sealing compound which is very sticky. Take care not to loose the grommet around the centre hole. 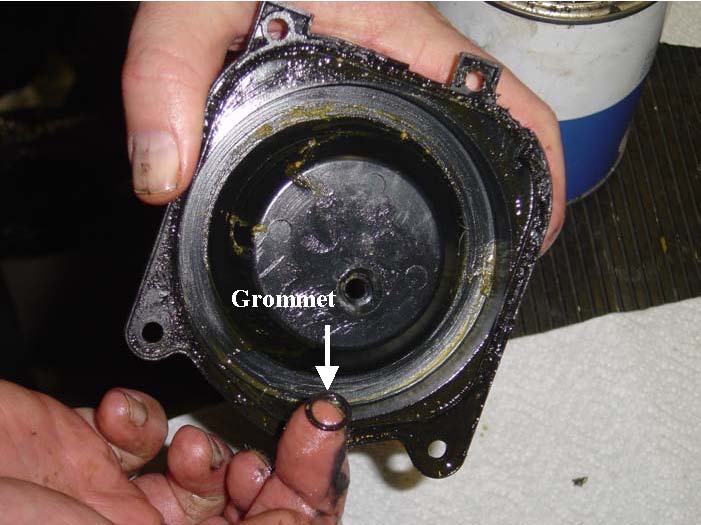 The toothed plastic rod in the aerial mast coils up into the plastic retaining ring when the aerial is retracted. The ring may have stuck in the cover when it was removed. 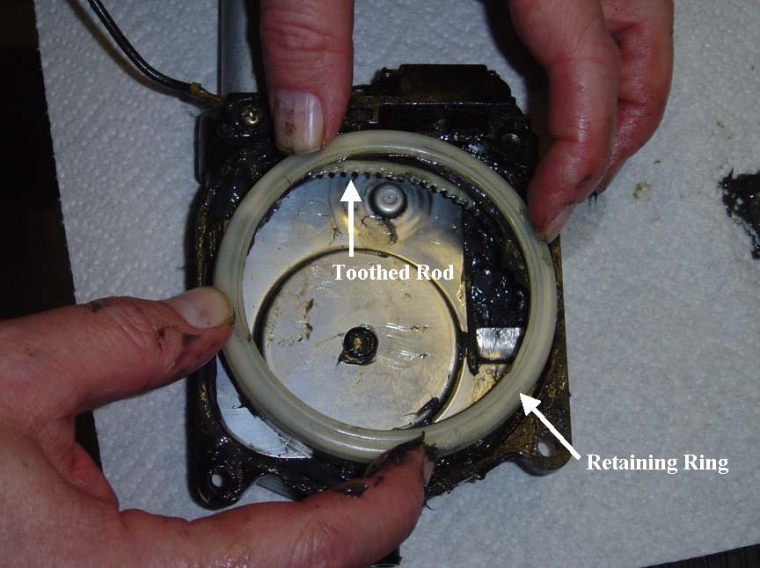 The retaining ring can be lifted out. 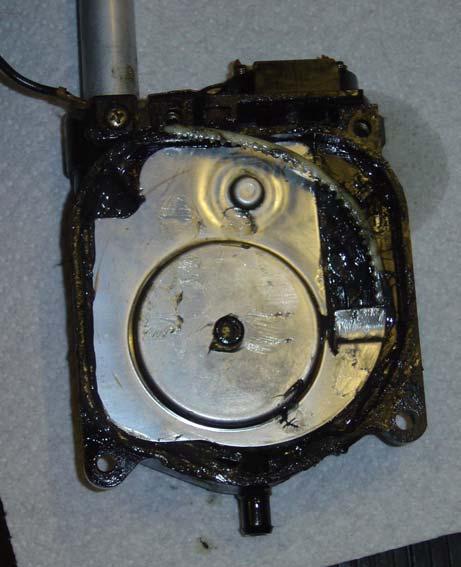 And the coverplate removed to reveal the clutch and gearing. 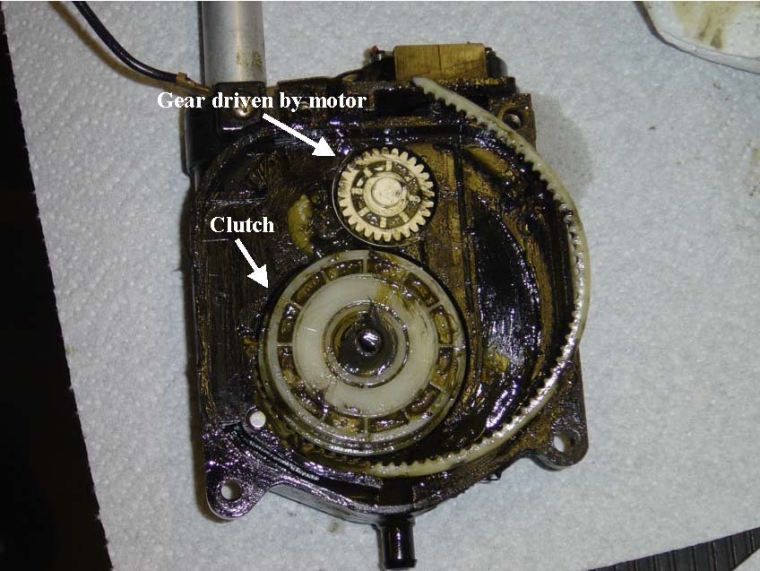 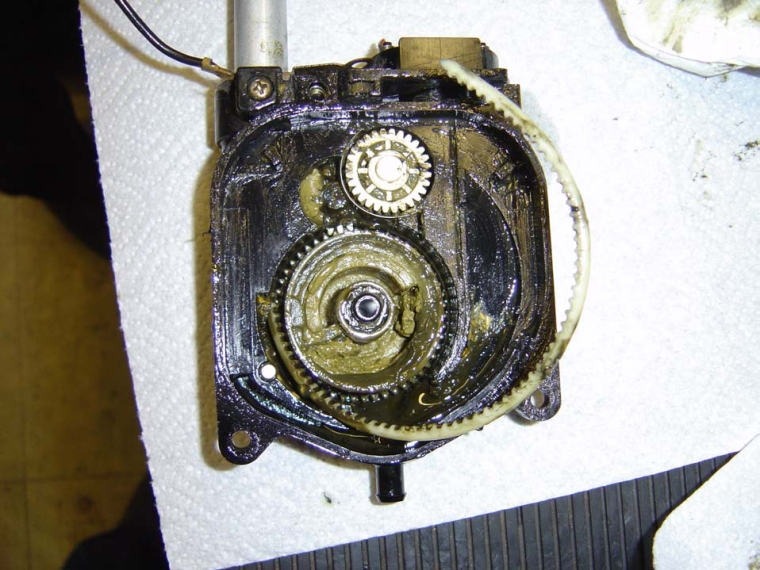 Repair
If required repairs may now be performed.

Repair/replace damaged parts such as gears or the aerial mast.

Free up a seized motor by cleaning the lower bearing on the motor with wire wool and removing corrosion from the mating part in the main assembly (between and below the bushes) with a half round needle file or other suitable tool. Replace the armature ensuring that you pull/push the brushes back into their housings so the commutator fits between them. Make sure the armature spins freely.

Re-Assembly
Re-assembly is the reverse of dismantling.

Make sure that all moving parts are lubricated with grease and that the brushes and commutator are clean, dry and free of any lubricant. Ensure the drain hole is clear. Make sure the mast can be easily be raised and lowered by hand before re-fitting the motor. 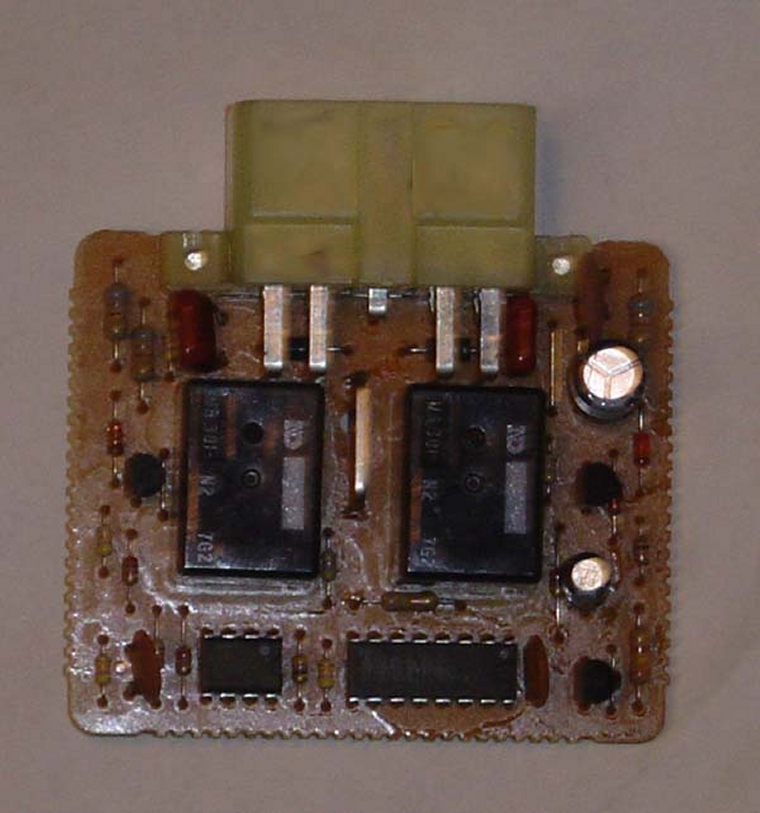 This shows the circuit and connection details. 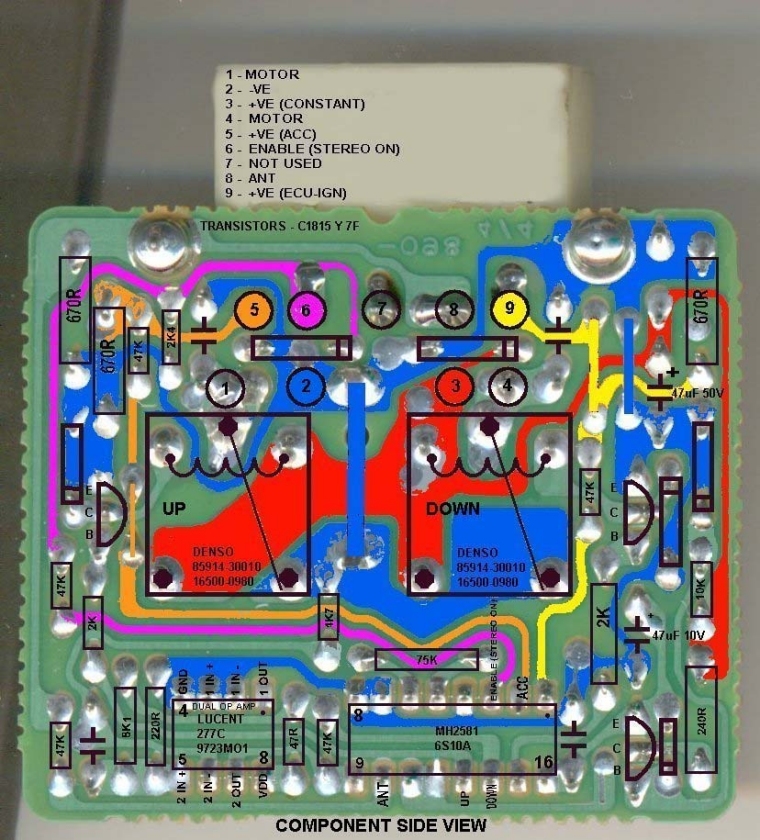 Why Third-Party Aerials Tend To Not Suit 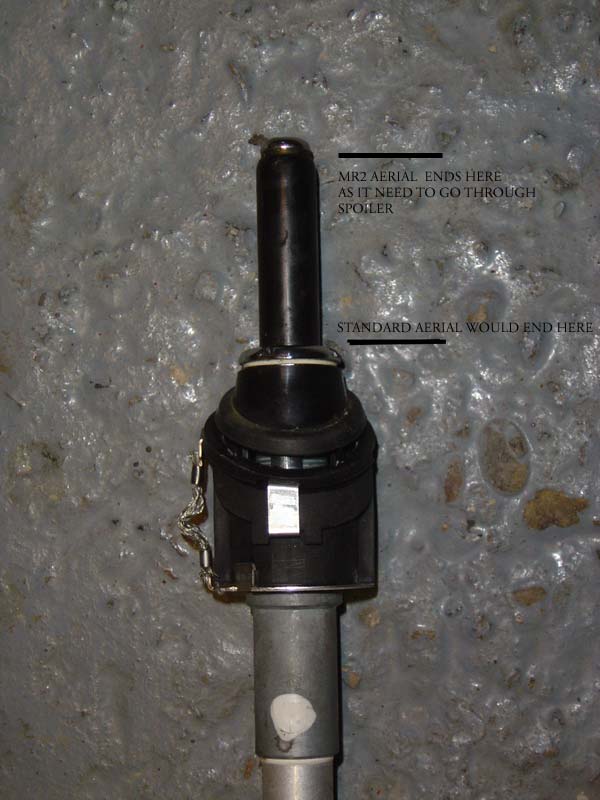 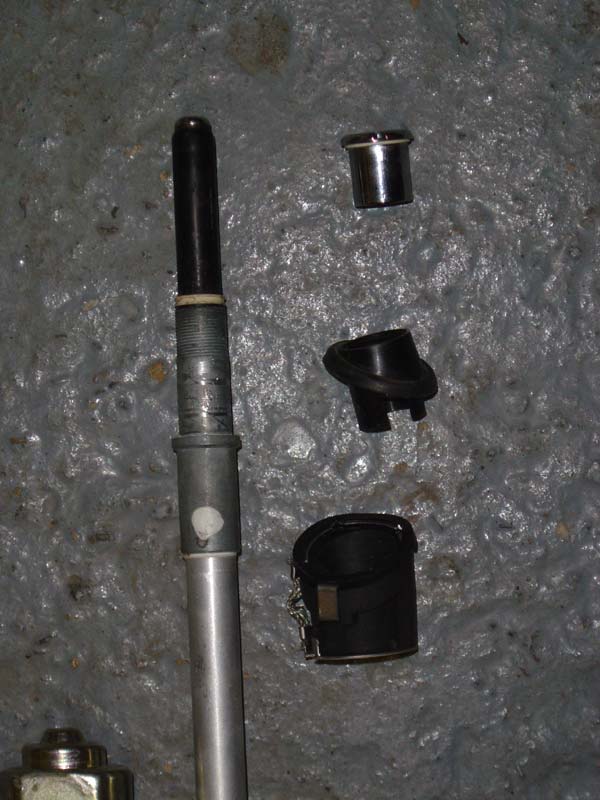