How To:- Polybush Engine Mounts

Just thought I'd put together a little write up on the Poly-bush engine mount swap I carried out.

Basically, upping your engine output has knock on effects. Increased torque will put increased strain on the front and rear gearbox mounts. Slapping a V6 in will have you destroying mounts on a regular basis (first hand experience). Poly-Bush engine mounts are much stiffer than stock, this will lead to increased cabin vibration BUT hopefully you wont destroy them in a couple of hundred miles!!!
This guide is detailed on a mk2 set of mounts but principles follow across any car.

I did this on my drive with no real specialist tools. General Workshop stuff aside removing the mount will need: 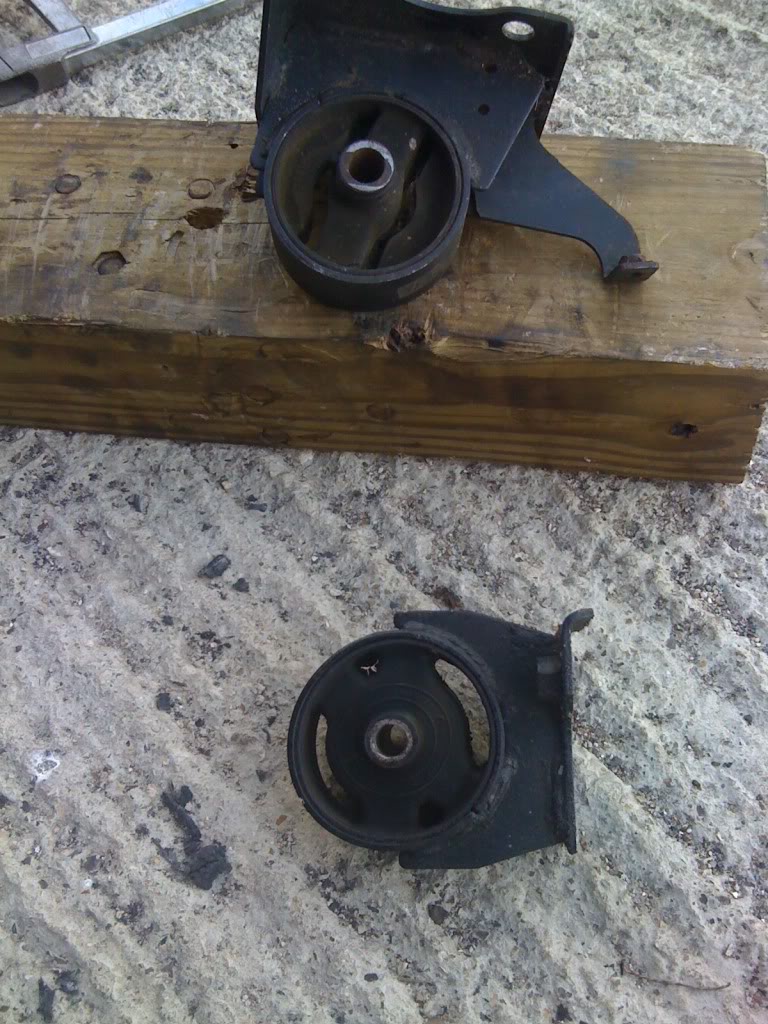 First pic:
Your two mounts off the car. Honestly, if you cannot manage to get to this step then best not attempting the rest. It is perfectly safe to remove both at the same time. The engine is supported by the Left and Right mounts, these Front and Rear mounts absorb the "torque" produced by the engine on acceleration & de-acceleration. 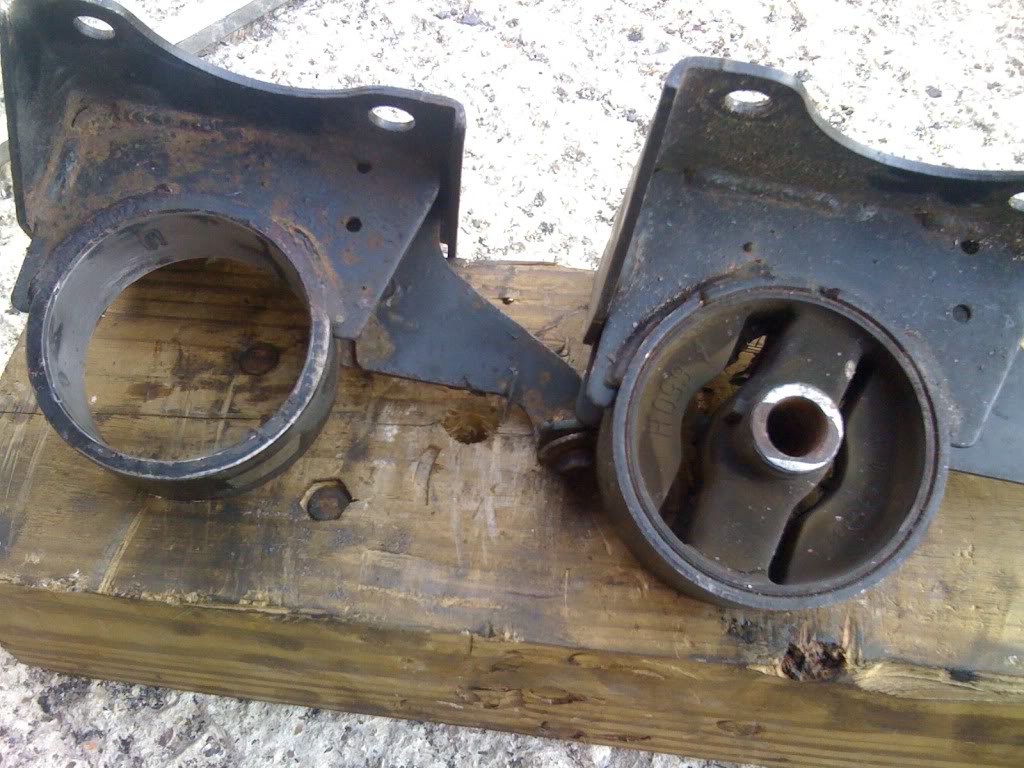 This is the Front Mount and two different types. On the left is, I believe, a rev-1 mount. Not suitable for Poly-Bushing, it is 75mm inside diameter..... Poly-bushes are 79mm. You will note on the right model the metal circular part is in two bits. The outer casing and the inner metal sleeve that is bonded to the rubber. Once the inner metal sleeve is removed it'll measure 79mm the same as the Poly-bush. 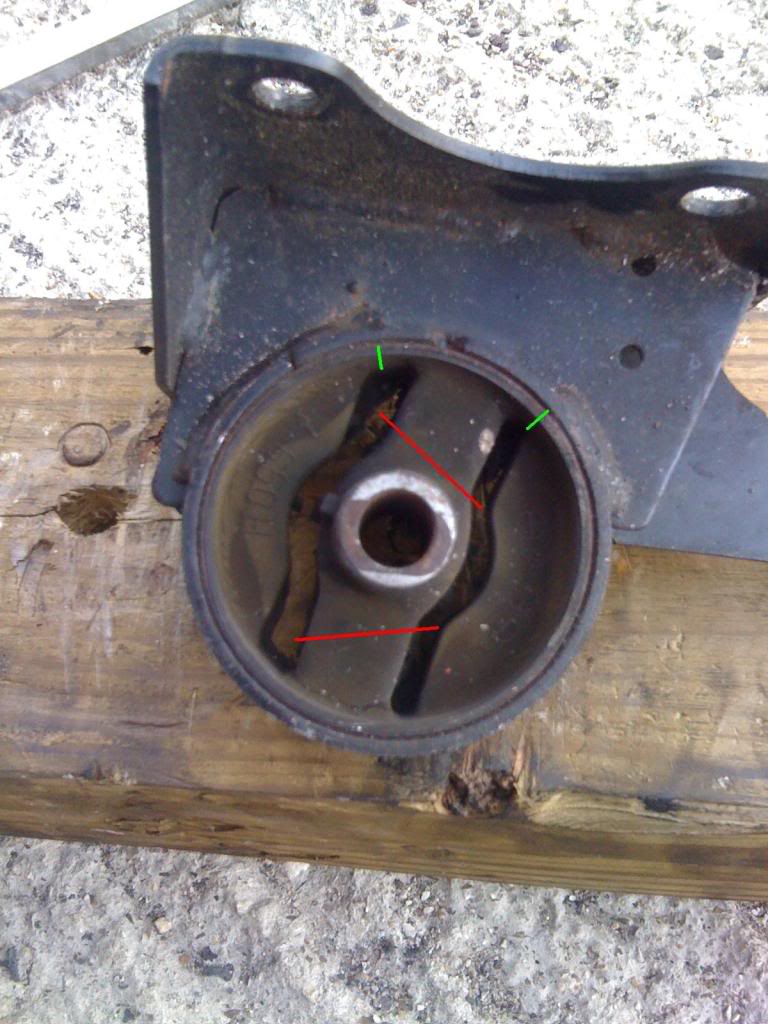 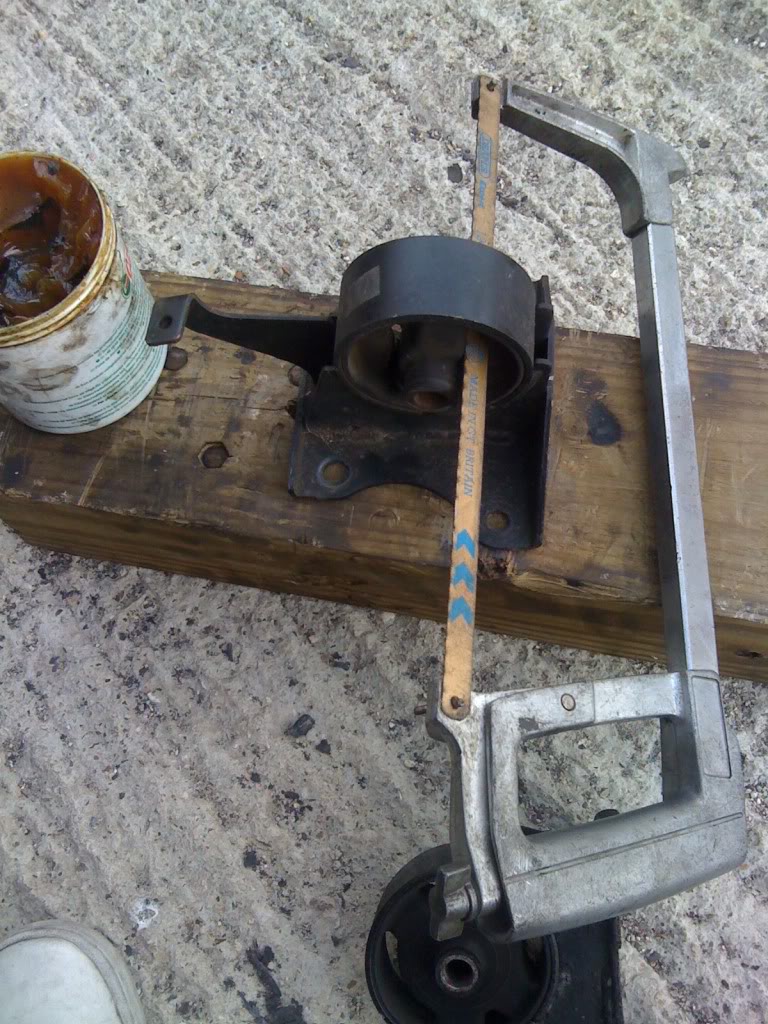 So using a full hacksaw (not a junior - that would be an exercise in futility), cut the rubber. Detach the blade, pass through the slit and re-attach (make sure you have the blade the correct way round - meaning right way up and blade direction) 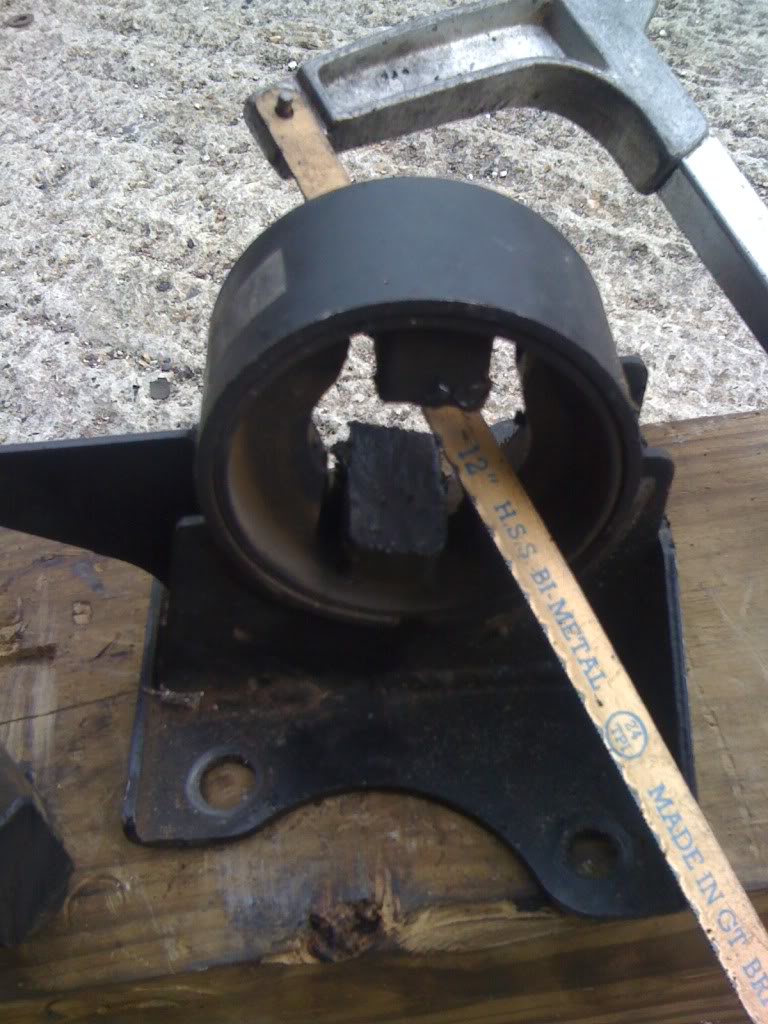 Once you cut the middle out pull it out the way you can get to work on the metal sleeve that the rubber is bonded to.
Take care when doing this. You want to cut through it as evenly as possible so to minimise the damage done to the outer (a few nicks will do no harm).
Keep the blade as flat as possible while cutting - watch the blade while cutting and you'll see if you need to raise/lower the handle. 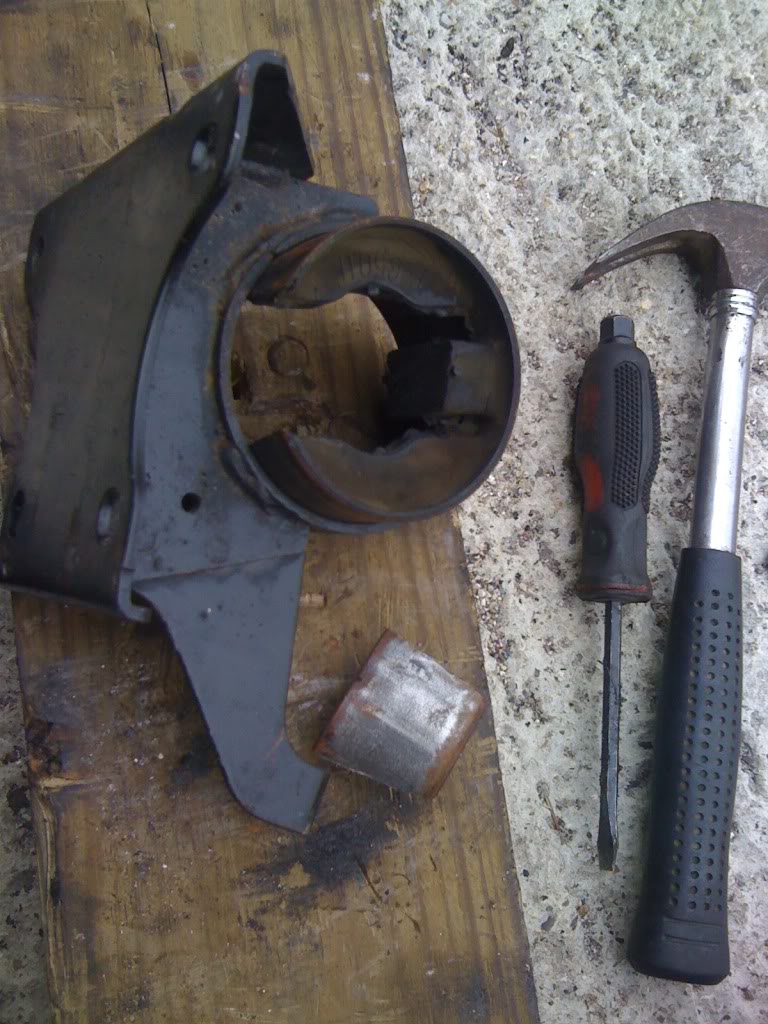 When you've cut through it, you'll be able to tell as you will see rust from between the joint showing through. Remove the hacksaw. Take your screwdriver and hammer, hold the mount flat on the wooden block. put the screwdriver between the two metal "rings" on the smaller segment and hammer away. this will split the inner bit out with ease. If it doesn't move, you haven't cut it enough. 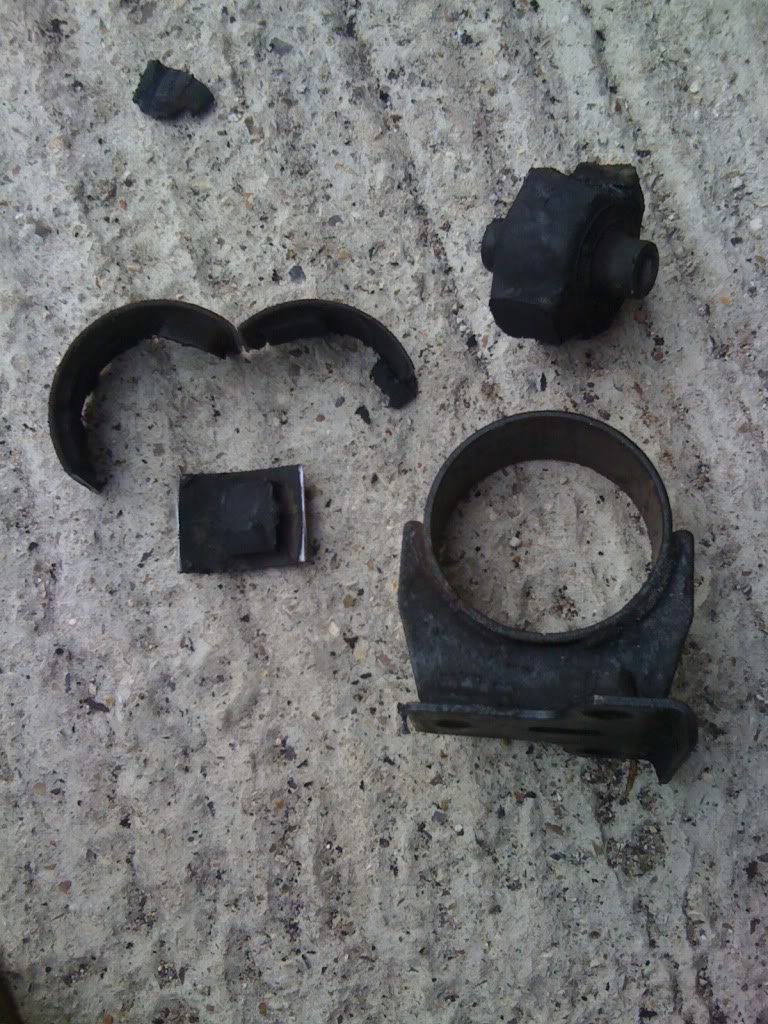 Rear mount follows the same principles,you may need to put in more cuts in the inner metal sleeve purely because of getting to it. 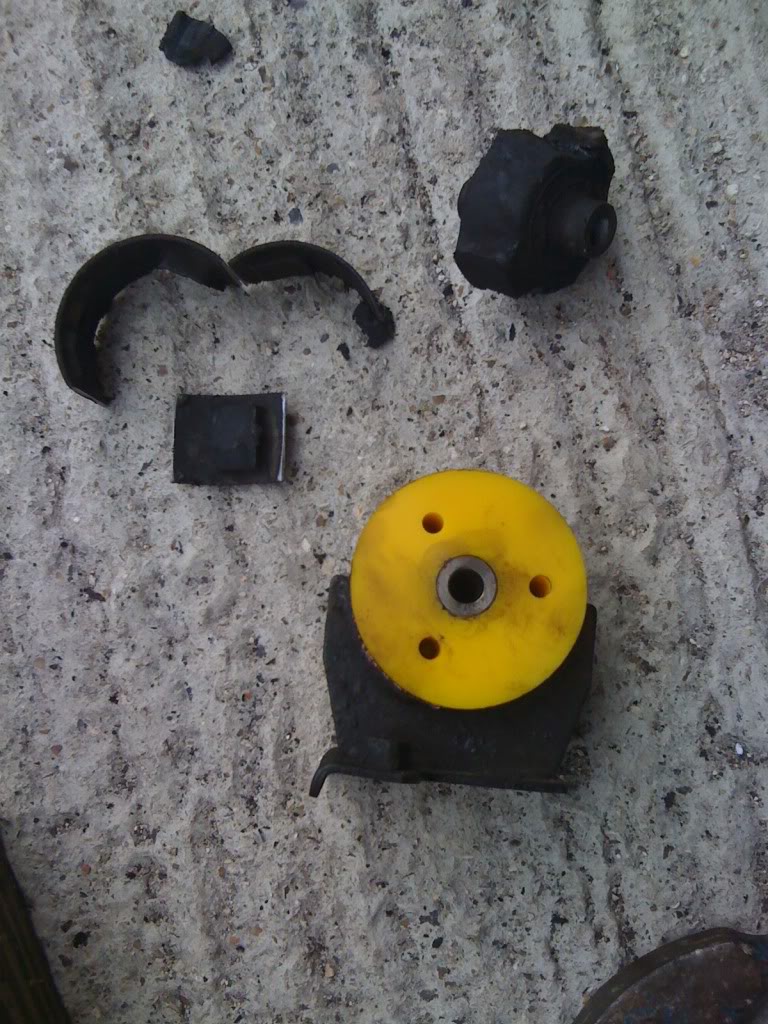 With the small segment out, the larger piece will spring out the way with ease.
Clean up the inside of the mount ready for the new bush. Slap some copper grease (provided with the mount) around the outside of the Poly-Bush and slip each half in.
Finally, a bit more copper grease on the inside and push home the inner metal spigot. 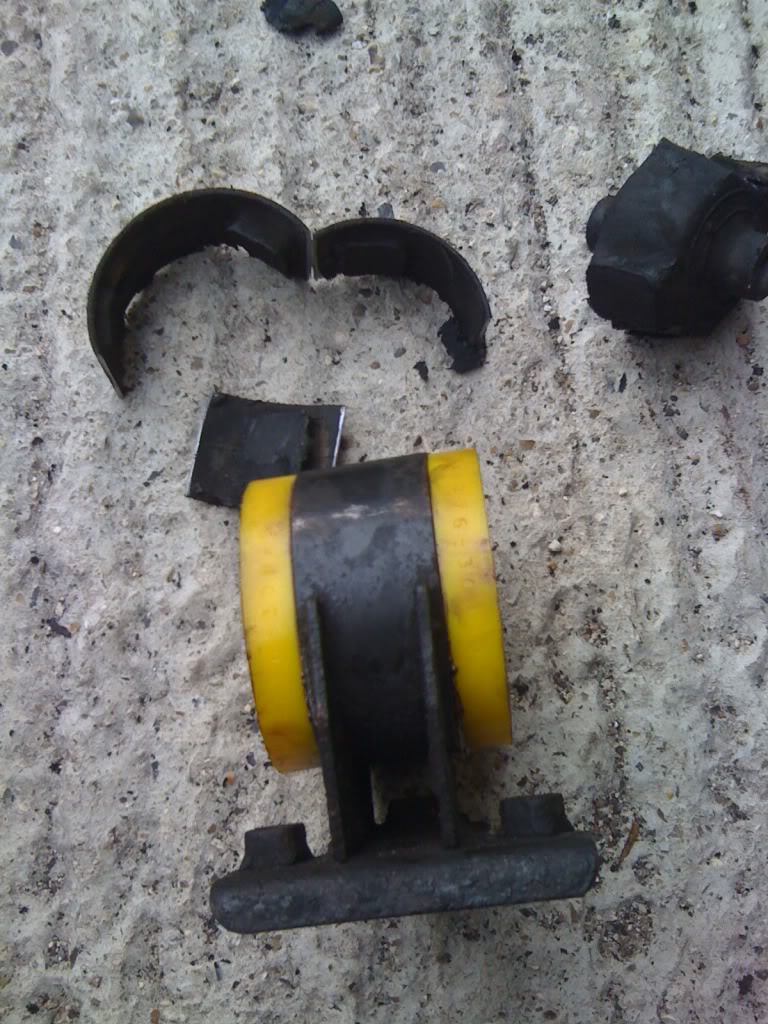 Refit the mounts to your car and job done  !