How To:- 3S-GTE Alternator Wiring Repair

Many thanks to Lewis Whitmore for making the effort to document and photograph his repairs, I'm quite sure many MK2 owners will benefit from it.

All the info is taken from this thread CLICKY

I've been having some long standing issues with ignition and battery drain on my rev2 turbo. Up to now, I've always had the expected charge voltage of around 14v at the battery terminals when engine is running.

I was about to take it out the other day when the window wipers were going slower than I'd expect. Turns out I'm no longer getting charge voltage at the battery.

I found a few posts about this issue previously and have tested the alternator plug voltage with ignition on. I get battery voltage at both of the outer pins, but only 2.5v on the middle pin. This is the black wire with the yellow stripe.

Black/yellow goes to the 7.5A fuse ECU-IG. Also passes through connector EB1 (below the fuse box I think). If you take out the fuse and test the fuse sockets, one side should have battery voltage, the other 0v. With your meter set to ohms test from the 0v socket to the appropriate pin on the alternator plug, should get a low (0.1ohms or thereabouts) if not try to trace the wire to the EB1 connector and repeat the tests from the fuse to the connector pin and from the connector pin to the alt plug, that should narrow down where the problem is, could be a slack/corroded connector of a wire damaged or broken internally, if that's the case replace the wire.
A quick check would be  a temporary wire from the fuse to the appropriate pin on the alternator plug.

Testing with a meter revealed a high resistance between the fuse socket and the alternator pin.

Furthermore, i manged to determine that the body side pin of the EB1 connector is getting the appropriate 12V when ignition is on. Must be the wire between the engine side pin of EB1 and the alternator plug.

Is this a direct cable that goes to the plug or does it go somewhere else first? I'll rig up a temp wire tomorrow and see if that fixes my issue. I'd like to fix it properly however. Is the cable run relatively straightforward if i wanted to remove the wire and do it properly? I'm thinking if one wire has had a problem, others in the loom may have also.

According to the diagrams it's direct from EB1 to the plug, IIRC it runs in a plastic conduit either under or above the inlet manifold, its been known for that wire to fail in that area. I've repaired a couple like that in the past.

First and foremost, i have found the issue, and it's with one of the splices in the loom which after consulting with Dawesey are factory splices (thanks!). I was significantly less irritated with the previous owners once i found out these splices are put in by Toyota. The insulation on these joints is basically just tape though which surprised me, so I'm keen to improve on this by doing it with some proper heat shrink. I will also re-do the other crimps which are currently in good condition, just to future proof so I don't need to have the loom off again in the near future.

One of the good joints which I'll insulate more robustly. 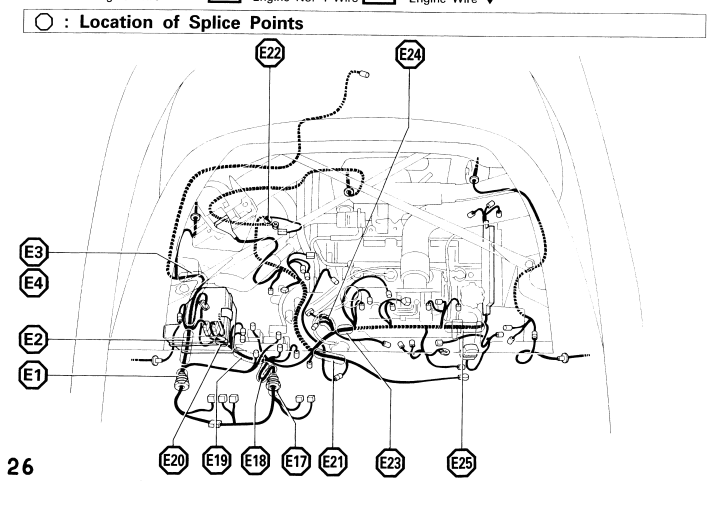 I cut out the crusty looking corroded splices and re-crimped them using an open barrel splice. This was then sealed in with some adhesive lined heat shrink. I wrapped the loom using a mixture of non-adhesive vinyl tape, and fabric type loom wrap.

Here is the end result. I found it difficult when putting the loom back together to find a decent reference picture for how the loom should look, which wires branch off where etc, so this picture can be added somewhere for reference material. 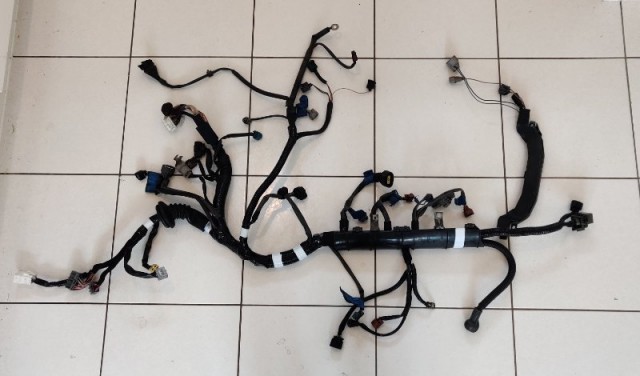 The white tape marks the places where the splices are located within the loom. Note that I didn't remove the original loom binding in the section leading up to the fuse box connections. There could be further splices here, but i decided i'd leave them alone. Other than that section, I've had the entire loom apart.

The most corroded splices (and the one that was completely broken) were found in the section with the two white bands to the left of the manifold loom tunnel. This is where the majority of the splices are found ( i think i re-did 5-6 splices in this area)

This is the area of loom that drops down below the coolant connectors to the throttle body, and the loom forms a low-point when installed. My thinking is that this is the area where the water collects off the rest of the loom and drips from, and can become saturated with water. This penetrates the 25 year old splices and corrodes the connectors. Toyota use a sheet of what looks like adhesive lined tape folded in half, to cover their splices. In all the ones i had removed, the adhesive was crusty and dry, definitely age related deterioration.

With new, tighter fitting adhesive heat shrink installed, i'm hoping this repair will now be good for another 25 years.

Here is everything buttoned back up again after installation.

As a side note, I finished the job with no bolts left over. The car also started first time with no connectors forgotten to be plugged in. Alternator is now charging a strong 14+ volts when running. First engine related job of this nature I've done so it's been a learning curve, but pleased with how the results came out nonetheless.