How To:- Change the Heater Control Lamps to LED's

Hi All, After changing mine to blue LED's I was mobbed by PM's asking various questions about how easy it was etc and what to do. So I thought it'd be a good idea to submit another How 2 for changing the bulbs to coloured LED's. I have done it step by step with pictures to make it as easy as I can. I hope you find it useful.
Jez

All set to Go
Firstly Pop off the back of the gear stick gator using both fingers (I am only using one as the other hand is holding the camera! Lift from the back first. 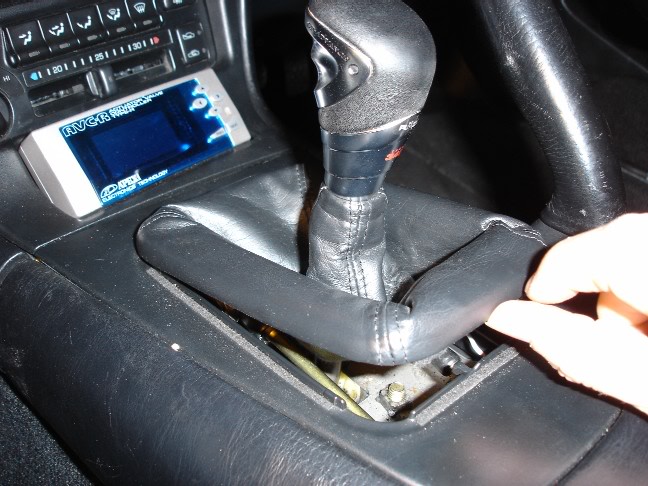 Then lift up the plastic gaiter surround (again from the back first!). 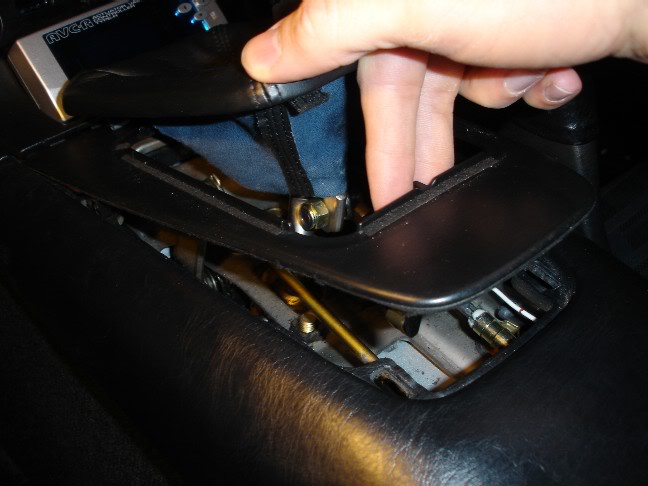 To save time you can twist the plastic surround and take it off over the gear stick gator and gear stick (this saves you time unscrewing gear knob and taking the gator off unnecessarily). 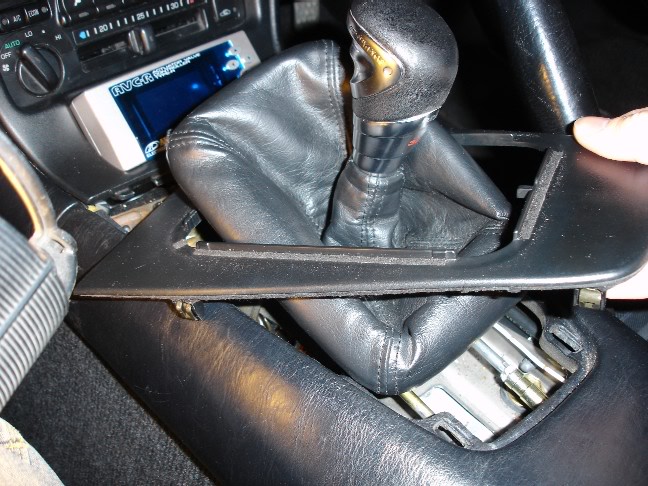 Remove the ash tray and you will see two phillips screws which need to be removed (see below).Place these somewhere safe. 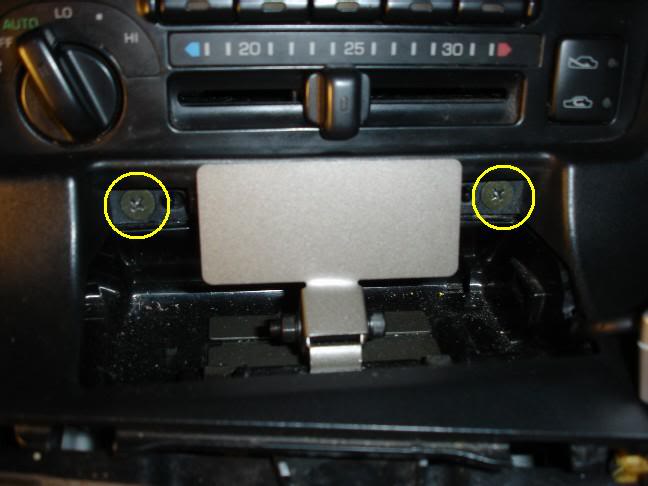 Gently prise the bottom of the stereo and heater surround away from the dashboard. It will pop out fairly easily. Do not get too aggressive with it as the top will still have wires connected (see red circles in second picture below). 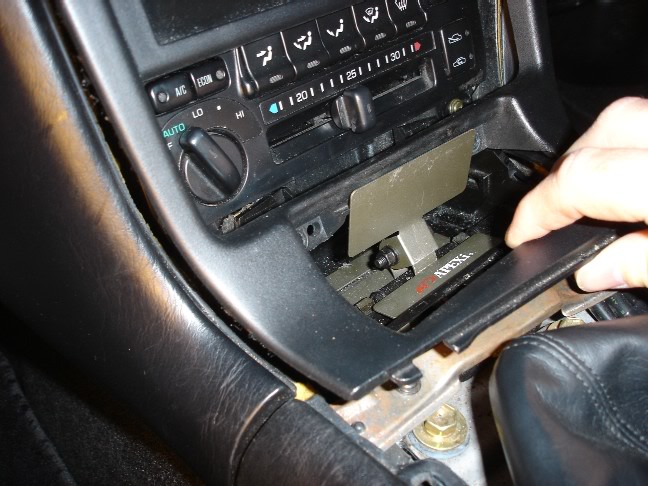 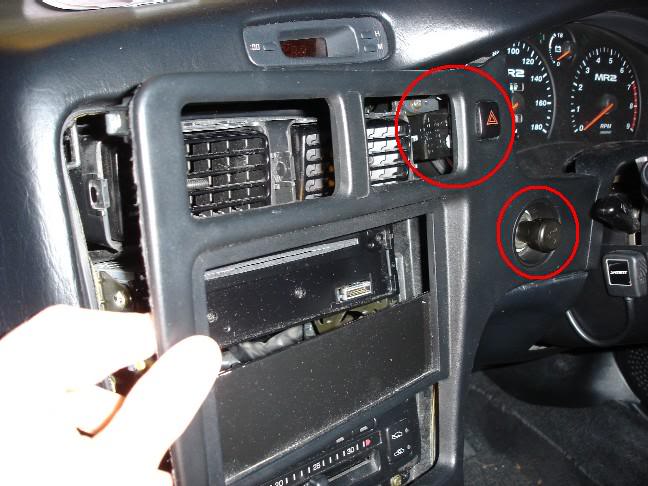 Leave the heater / stereo surround loose and look just under the cigarette lighter to find a screw. Remove this screw pictured below. 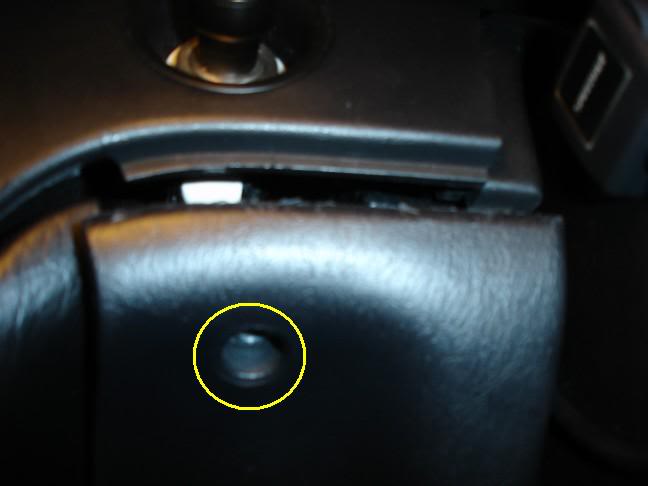 Once removed, the next bit is a bit tricky (but easy when you know how!). Using the picture below, but your thumbs on the front of the small part of plastic nearest to your dashboard and your fingers on the back of the loose heater / stereo surround and pull and push as below. The heater surround should slide forward and dislocate. Again, be careful here as the wires are still attached behind (see picture two below). 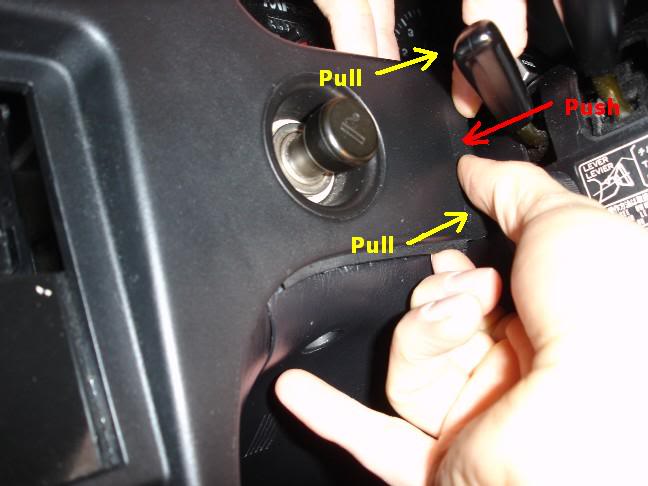 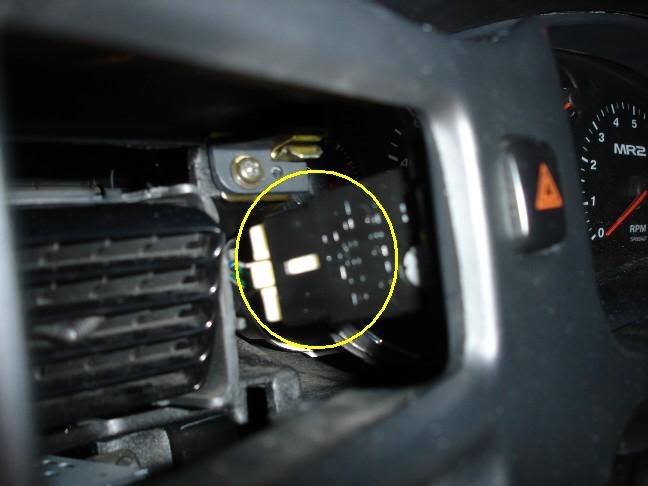 Carefully squeeze the plastic plug attached to the hazard warning lights switch and remove (see below). 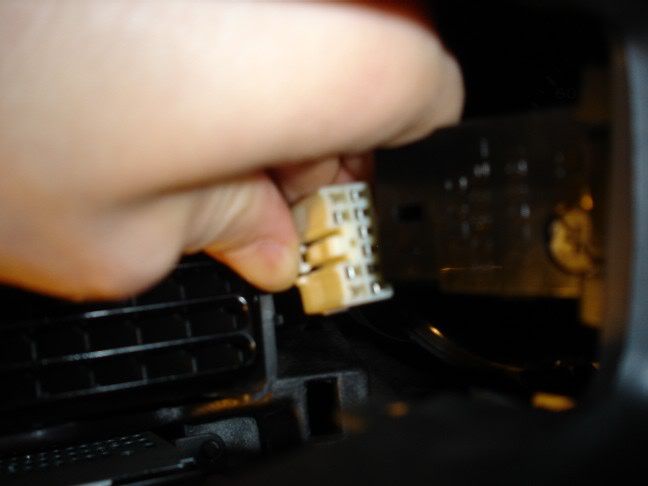 Take the same approach and remove the power and the LED to the cigarette surround. 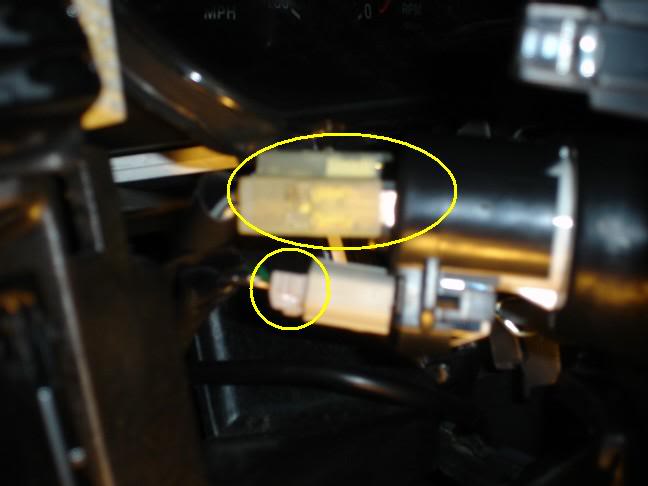 I have twisted the bulb in this picture so that you can see how it disconnects. Again, squeeze tab and disconnect. 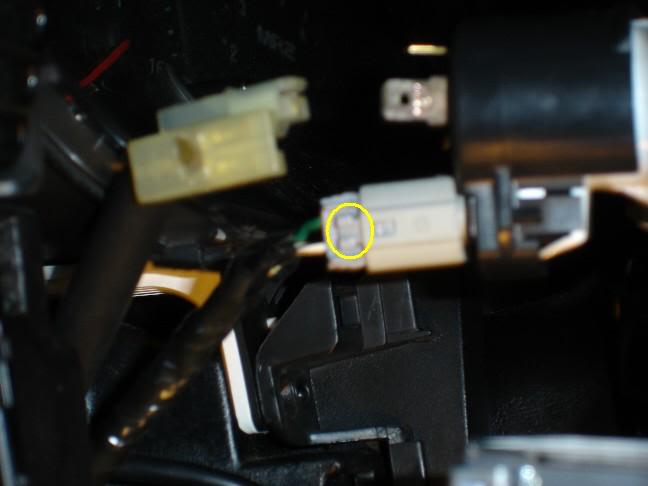 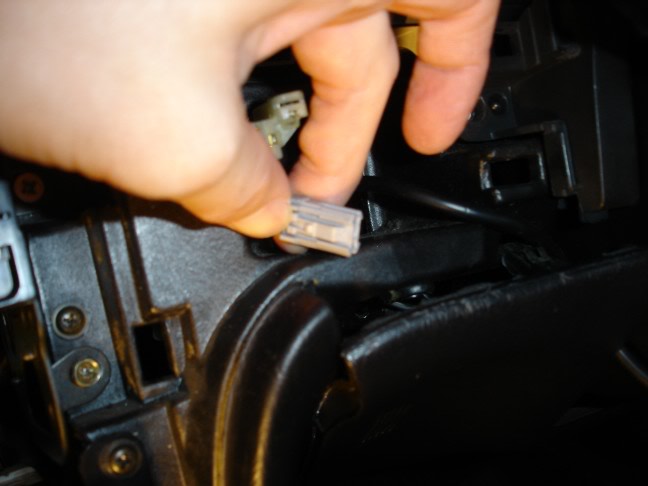 You should be able to totally remove the heater /stereo surround at this point. From here you will be able to see the heater control unit and you can unscrew the four screws (pictured below with yellow circles around them). Remove these screw. 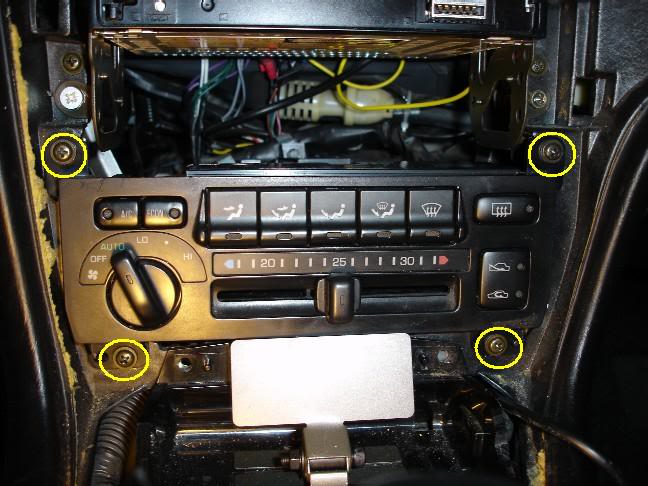 At this point you should be able to gently slide the heater controls forward. If you look behind the unit you will see four power connections that need to be disconnected in the usual fashion. You will also need to unclip the large power lead (ringed in the red circle in the picture below). 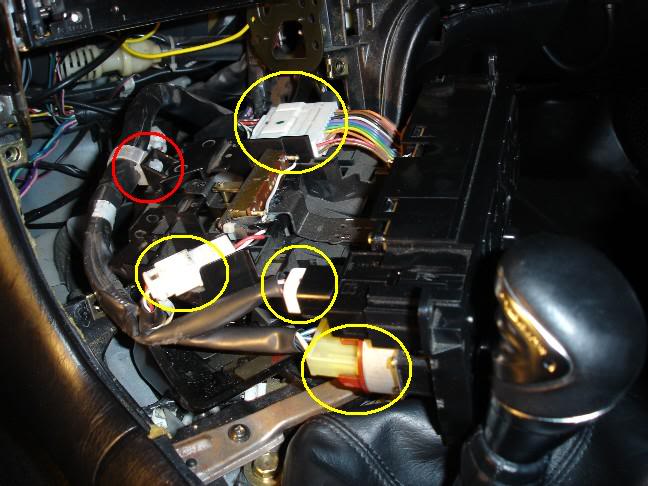 The heater unit should then come straight out. Just remember what connects to what. 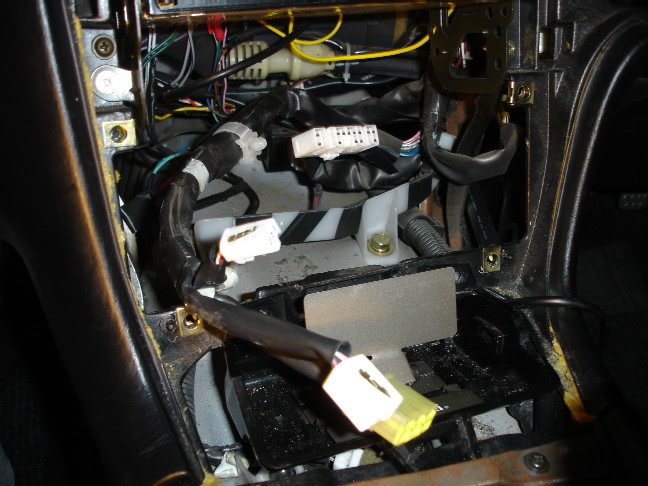 Looking at the back of the heater unit, draw your attention to the two LED's circled in yellow below. 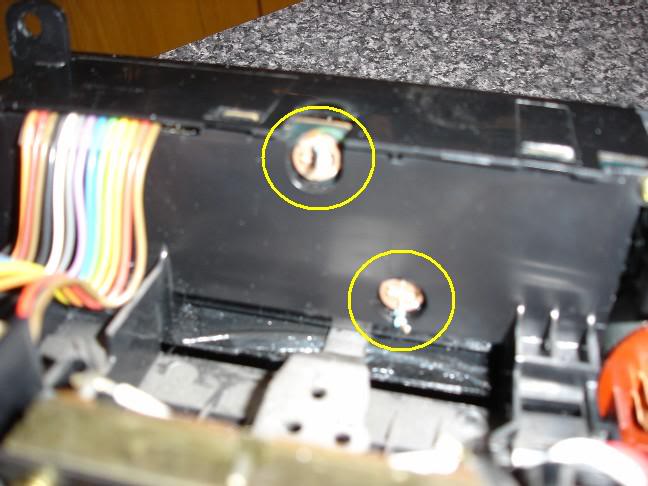 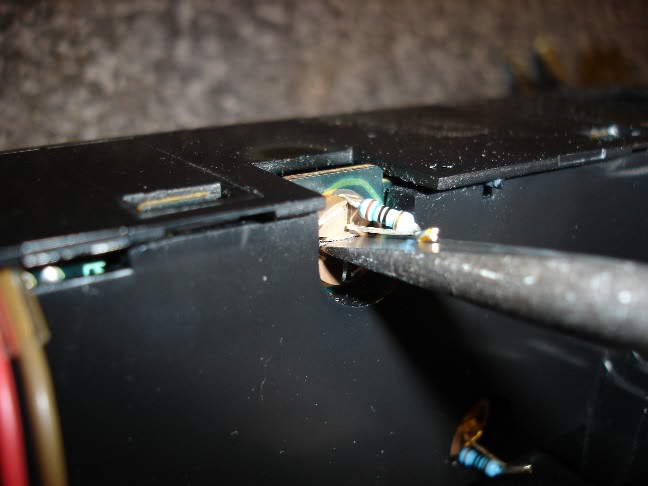 You can then remove the existing bulb (and little green plastic bulb covers) and insert the new LED into the small holes in the holder, as pictured below. Take note of the way that the old bulb wires wrapped around the holder. You will need to do this again in a minute! 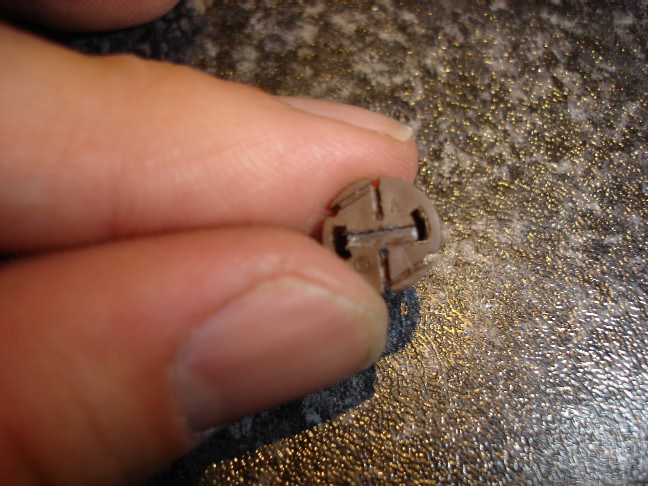 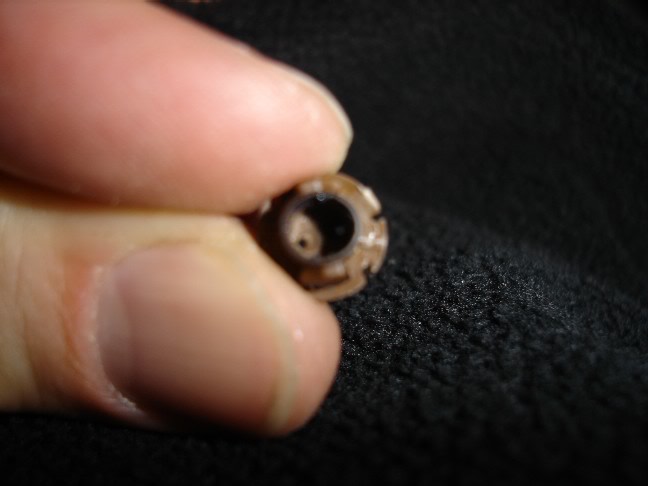 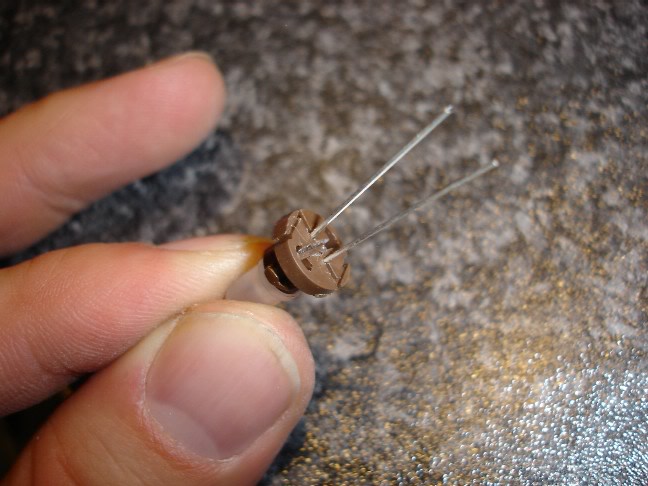 Using your finger (and probably some pliers) bend one leg of the LED around the holder on one side. Leave the other leg of the LED protruding (as you will need to attach the resistor to this!). 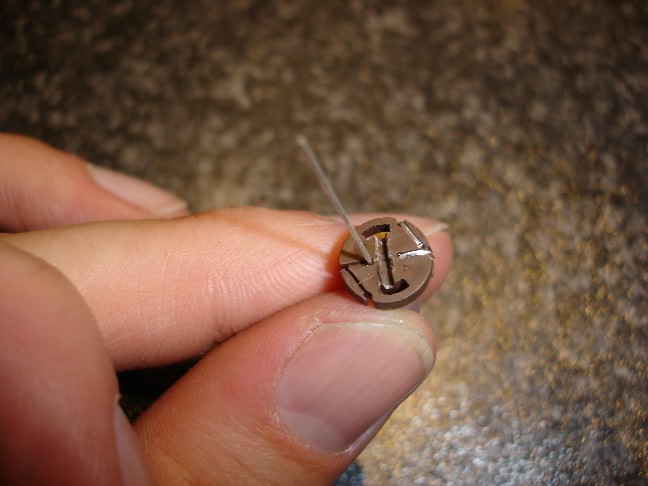 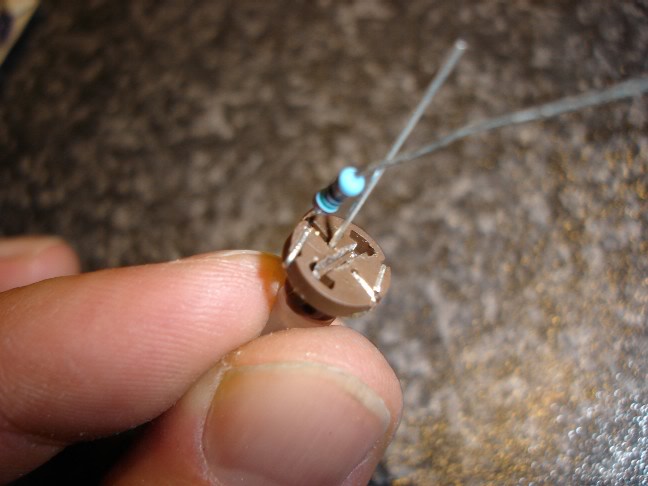 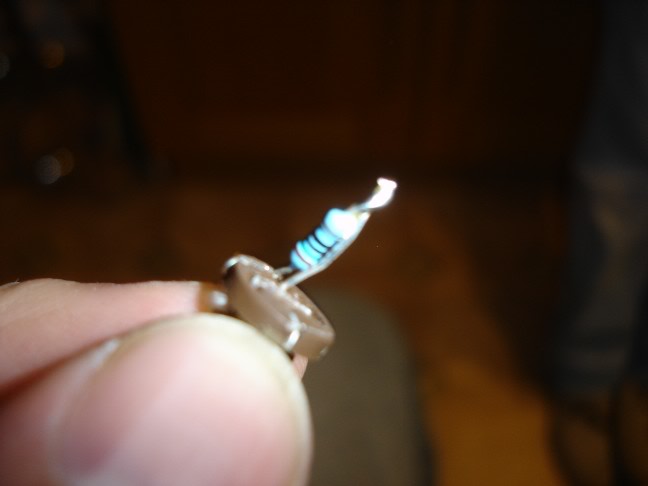 Re-insert LED into the back of the heater controls and twist clockwise. Be careful NOT to scratch the circuit board as you twist the bulb holders into place. 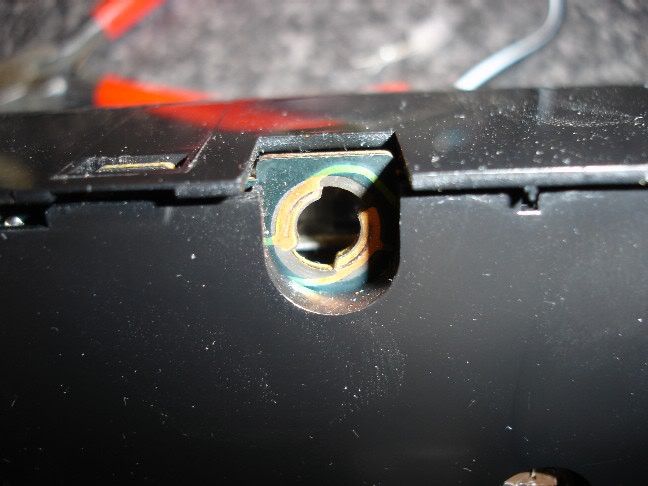 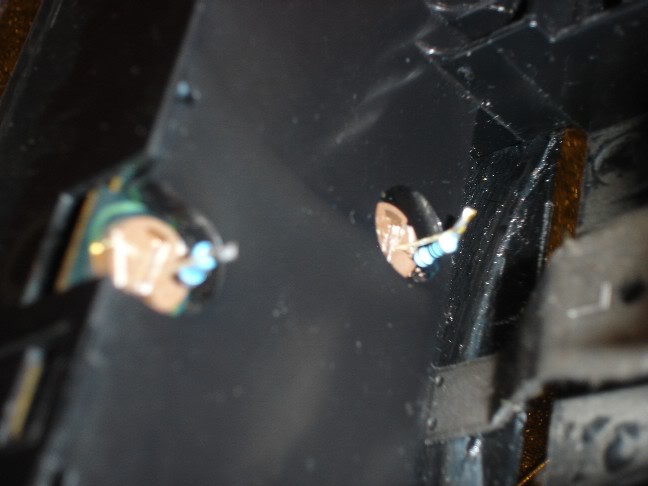 Test Now!At this point check the bulbs are in the right way by plugging the largest connector in (the one on the back right hand side in my pics with lots of coloured wires from it) and switch on your lights. They should both come on if they are the right way around. If one or both do not come on, remove the LED's again, twist 180 degrees and re-insert. They should both work. You can then change the LED in the air conditioning control switch in the same manner. See below for pics. 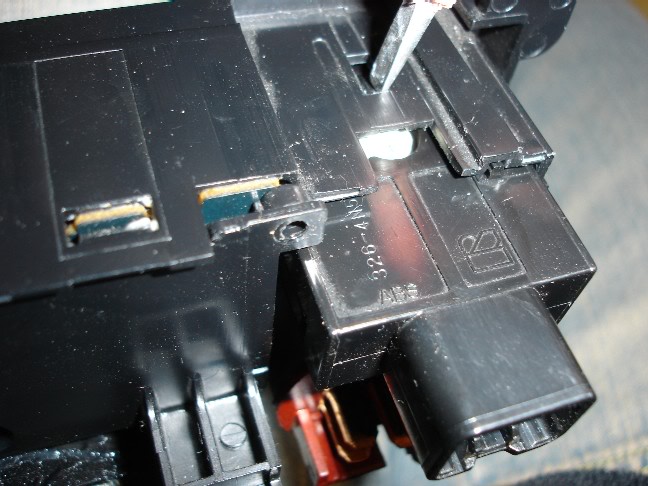 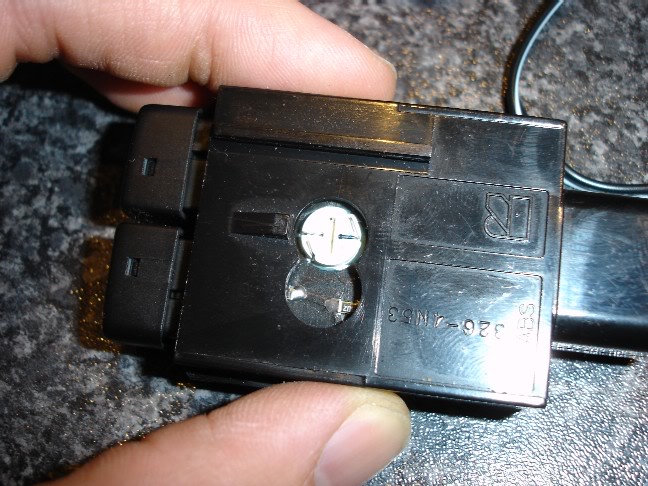 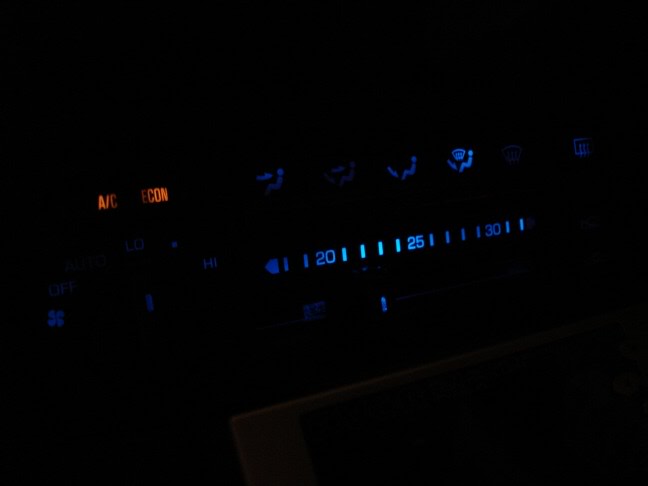 Hope this is Helpful.